Target Ad Turning Heads for All the Right Reasons 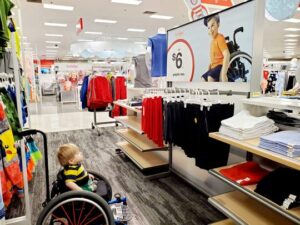 Oliver Garza-Pena, 2, and his mother were on a typical Target run when Oliver saw something that stopped him in his tracks. As they entered the boy’s clothing department, Oliver, who uses a wheelchair because of a rare developmental condition, quickly turned when something caught his eye. He was captivated by the image on one of the ads. It featured a boy just like him, smiling, and in a wheelchair. Oliver’s mom, Demi Garza-Pena told The Arizona Republic that “He couldn’t stop looking at it.” It brought a smile to both Oliver and his mother’s faces and it is a reminder of how much representation matters. Read more.

Caren and Dustin Moore had tried for years to have kids, so they were thrilled when they were given the chance to adopt a newborn baby in Colorado. On the flight back home to California, the couple was nervous about how their 8-day-old baby would handle flying. So, they decided to share their story with the flight attendants and some passengers around them. After hearing the news, the flight attendants decided they would throw an impromptu baby shower. To the Moores’ shock, one attendant announced the Moores’ adoption over the intercom, prompting their fellow passengers to erupt with cheers and applause. A flight attendant passed out pens and napkins so that everyone on the plane could write notes of encouragement for the new parents. The airplane staff collected more than 60 messages for the Moores. Caren and Dustin have since then arranged those napkin notes into scrapbook which they hope to one day pass on to their daughter. New father Dustin tweeted, “What all of those perfect strangers and attendants did not know was the emotionally tender state of two brand-new parents,” wrote Dustin. “Parents who—after 9 years of trying—had been blessed with their first child. Parents who felt scared, but determined in their new role” Read more. 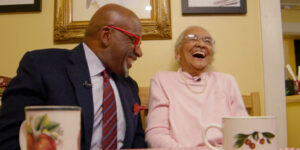 In 1952, Mary Woodruff and her husband opened Woodruff’s Café & Pie Shop in Monroe, Virginia. Today, Woodruff, 103, and her daughters still operate this iconic spot. In the early years, it was difficult for Woodruff and her husband to operate a black-owned business. After Woodruff’s cousins integrated a nearby school, there were boycotts and rocks thrown through their windows. However, in the midst of the opposition, Woodruff’s Café & Pie Shop remained a sweet staple in the community. Today, business is booming and the family is still working together to provide unique and delicious pies to the community. Read more.

For the past four years, one woman has written thousands of love letters to first responders. Natalie Reilly of Arizona first began writing these letters with her mother. After her mother lost her battle with cancer, Natlie carried on the loving work, continuing to send letters to show her appreciation for first responders. To date, her organization, Nothing But Love Notes has sent over 20,000 cards to firefighters and police. Natalie even met her now boyfriend through her program. He received one of her love letters last year, and the rest is history. Natalie’s work shows that a little appreciation can go a long way! Read more.

Orchestra Harnesses the Power of Touch 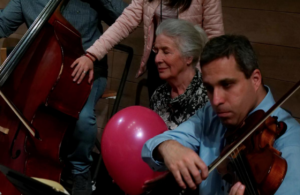 Budapest’s Danubia Orchestra is allowing people to experience Beethoven’s Fifth Symphony in the same way that he did–through physical touch. Beethoven, who experienced gradual hearing loss, was already experiencing significant hearing impairment by the time he wrote his Fifth Symphony. Now, the Danubia Orchestra is allowing deaf and hard-of-hearing individuals to feel the music. During the performance, some audience members sit close enough that they can feel the instruments, others are given balloons to feel the vibrations of the sound, and some are given hyper-sensitive hearing aids. Read more.