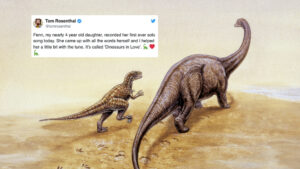 Although she is only 3 years old, Fenn Rosenthal’s first song is already a viral hit! Currently, her original song “Dinosaurs in Love” has over five million views on Twitter. This song has everything — dinosaurs, a love story, a party, and a tragic ending all neatly wrapped up in less than one minute. As her little voice sings along, you can’t help but fall in love with her and her music. Fenn’s father is London-based singer/songwriter Tom Rosenthal, and he and Fenn frequently create songs in his studio. Hopefully, Fenn has another hit on the way! Read more.

Kupata, a stray dog who went viral for escorting a group of kindergarteners safely across a busy street in Batumi, Georgia, has been honored with a new doghouse along with a “People’s Choice” star. Locals adore Kupata, whose name in Swahili means “sausage” in English. One local woman told Radio Tavisupleba: “He loves kids so much. If he sees them wanting to cross [the road], he will immediately go to their aid, and may even wait for them in the park.” The viral video shows Kupata running into traffic and barking at cars to clear the road ahead for the children. With his impressive display of heroism and safety skills, Kupata definitely deserves the attention , and maybe an extra belly rub! Read more. 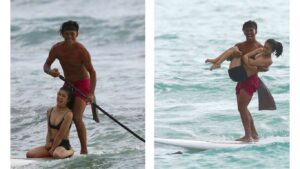 Hawaiian surfer Kamalu Rosa believes in the healing power of water. So when he met a woman named Stephanie with dreams of surfing on the shores of Waikiki, he knew what he had to do. Stephanie has cerebral palsy and is unable to walk, but has always wanted to experience the rush of surfing. After talking with Stephanie’s friends and family, Rosa grabbed his surfboard, carried Stephanie to it and paddled them both out to catch some waves. “It brought me tears out there,” Rosa said. “She was so excited and happy. It was an unbelievable experience.” While the experience was one neither Rosa nor Stephanie will forget, for the Waikiki native, showing love and respect for others is all part of the “aloha” way of life. Read more.

In December, Gallup conducted a series of phone interviews to ask Americans how many times they frequented various activities. Going to the library, the movies, live sporting events, museums, concerts, amusement parks, and casinos were all provided as options. In what may seem as a surprise, U.S. adults reported going to the library almost twice as frequently as they reported going to the movies. Reports show that libraries have been trending, since a 2016 Pew research poll cited two-thirds of Americans “agree that libraries are important and add value to their communities.” Read more here (and then visit your local library!) Read more. 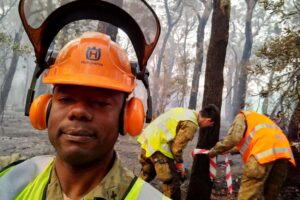 Australian firefighters are currently getting help from an unlikely source. Three Sydney Catholic priests have joined the 3,000 other Australian Defense Force reservists that are currently providing support to communities and firefighters impacted by the Australian bushfires. Father Andrew Feng, Father Francis Ghanem, and Father Kene Onwukwe are working full-time alongside exhausted firefighters and relief services. Father Onwukwe says that although they are helping in many ways, their primary role is to provide a “ministry of presence.” Along with manual labor and prayer, simply visiting with those affected by the bushfires can be a huge comfort. Read more here; to donate to a local fire brigade click here.