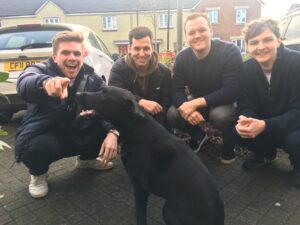 Won’t You Be My (Dog) Neighbor?

For four guys longing for a fuzzy companion, things are looking pup. Jack McCrossan and his three roommates were disappointed their apartment in Bristol, England came with a no-pets policy, so when the group saw a dog in a neighbor’s window, they were inspired. They dropped off a formal letter to their neighbor requesting the privilege of walking the dog. To their surprise, the boys received a positive response directly from Stevie Ticks, the dog, herself. One of the four boys tweeted out their note exchange, and the wholesome story has since gone viral. Stevie has managed to stay humble, despite her internet fame. “We keep telling her how many people are following her and interested in her relationship with her new boyfriends,” her owner says, “but she just keeps giving me her paw for treats.” Read more.

Virginia Physics Professor Lights a Fire in His Students’ Curriculum 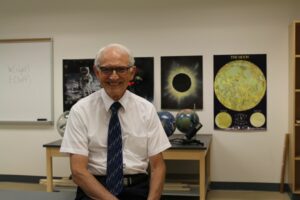 They say the best teachers go above and beyond for their students, but this physics professor in Virginia is going to infinity and beyond. To help his students better understand the laws of physics, David Wright, Ph.D. conducts experiments that range from using a fire extinguisher to roll himself down the hallway to laying on a bed of nails — and one student couldn’t help but share them. Videos that show off Wright’s enthusiasm for bringing equations and PowerPoint presentations to life with interactive lessons have become a viral sensation — especially because of the bond between the 18-year-old student who posted the videos and the 69-year-old Ph.D. professor starring in them. Erica Church, who posted the videos, says she decided to share them because “I really think that it shows that if you love what you do it’ll radiate to other people, and that learning doesn’t have to be boring and hard.” Read more. 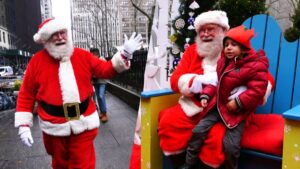 Dr. Charles Nuttall’s work with the International Physicians for the Prevention of Nuclear War earned him a Nobel Peace Prize in 1985. His strong resemblance to a certain man in the red suit earned him the role of Santa six years ago, and he’s been nailing the part ever since then. Nattall is a trained doctor and clinical consultant living on the Upper East Side of NYC, but in the months leading up to Christmas, he starts growing out his beard to prepare for the role he seems born to play: Santa Claus. Now, he embraces the magic of the role each year as Mr. Claus in New York City’s Bryant Park, where the medicine of laughter appears to be a carefully prescribed “ho ho ho!” Read more. 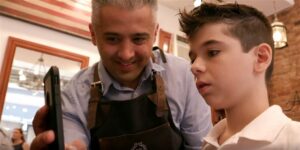 For kids with autism and other sensory issues, getting a haircut can be a particularly traumatic experience, especially with all the noise of buzzers, hair dryers, and conversation in salons. Barber’s Blueprints, an NYC hair salon, is seeking to change that. The salon is the first to be certified “sensory-inclusive,” and makes special accommodations (like lowering the music levels, refraining from using dryers, and training staff to recognize sensory overload) so those with autism can feel safe and cared for. Now that’s a cut above the rest! Read more. 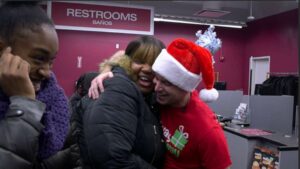 Santa’s Helpers Pay Away the Layaway

Santa may live at the North Pole, but his helpers were taking action at one NYC department store last week. The nonprofit organization Pay Away the Layaway helped more than 50 families who had layaway accounts at Burlington department store with a donation totaling close to $10,000. Ian Bell, co-founder of the organization, says he loves helping others who might be strapped for cash this season. “There’s nothing I find that really compares to that feeling, especially that instant where they say that whatever baggage they were walking in with, whatever challenges they had, it just completely disappeared.” Read more.