Mary MacInnes initially studied fashion to pursue a career in the bridal industry — until a friend asked if MacInnes would create a stuffed bear using a loved one’s favorite clothes. After making the first “memory bear,” MacInnes says the requests started to pour in as people were looking for a more tangible way to remember friends and relatives who had passed. Six years later, the 21-one-year old living in London has evolved her craft into a full-fledged business. Each bear pays tribute to a loved one by using the person’s favorite clothes, and can also include jewelry and other personal items. While this might be a weighty responsibility, MacInnes says, “It really is a privilege to be asked to create something from people’s personal possessions.” Read more.

Bride Shares a “First Look” With Her Best Friend — Her Brother

Bride-to-be Ashley Rice had always imagined she and her future husband would first see each other on their wedding day as she walked down the aisle. So when it came time to decide who to share her “first look” photo with before the ceremony, her brother Nick was the most logical choice. Nick is Ashley’s little brother and “best friend.” He also has Down syndrome. Despite the unique circumstances, Ashley says, “My relationship with Nick is a beautiful one, but also a normal one … he is still my little brother and we do normal things that brothers and sisters do.” Still, when Nick saw his sister for the first time on her wedding day, the result was a touching moment between siblings that resonated with many people online and has been shared thousands of times on Facebook. Read more. 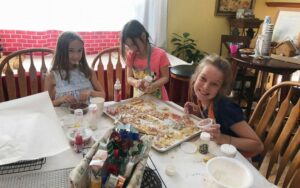 Everyone deserves to celebrate Christmas, according to Cookies for Troops, a nonprofit organization that makes and sends care packages to troops abroad. The sweet initiative began when Santina Flynn’s son Justin joined the Marines and told her that some guys in his unit didn’t receive care packages on Christmas. This was 12 years ago, and now a group of friends gathers in the Flynn’s New Jersey kitchen each year to bake hundreds of dozens of cookies to send to soldiers away from their families on duty. This year, baked a record-breaking 3,694 cookies. Read more. 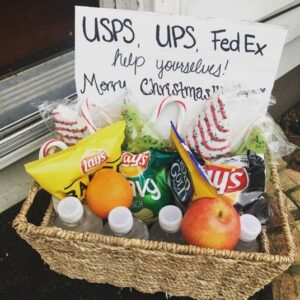 There’s no need to wait until Christmas to start spreading holiday cheer. Across the country, people are surprising the hardworking delivery people who make it through snow, rain, heat, and gloom of night to deliver their packages in time for the holidays. In Delaware, Kathy Ouma wanted to say thank you during the extra busy holiday season, so she started leaving snacks and drinks on her porch. Over in Indiana, Laura Stoltz has made her “delivery driver Christmas cheer box” a tradition. This idea has so far been a success: Ouma says she can feel the “positive energy” when delivery drivers show up at her house, and Stolz has made a popular printable sign for others to use to make their own box of snacks. Santa would be proud! Read more. 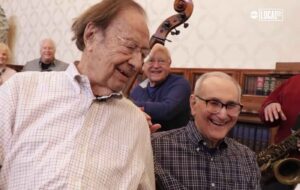 You’re Never Too Old to Get Jazzy

Great music can keep you young, and that’s certainly the case for 102-year-old Alan Tripp and his counterpart, 88-year-old Marvin Weisbord, who recently released an album of jazz songs for seniors. The elderly musical duo met at their Pennsylvania retirement home and began writing songs (about everything from heartbreak to getting old) together two years ago. They managed to gather together a team of musicians and record the 8-track album “Senior Songbook.” Weisbord says he never expected to be doing this in his old age, but he has no intention of slowing down anytime soon. “I’ve never had so much fun in my life,” he says. Read more.