We hope you had a spooky Halloween! If you’re looking to see the cutest thing from the Halloween season, you’re in luck. Animals in Disney’s Animal Kingdom have embraced a new kind of entertainment… pumpkins! The animals are in the midst of “enrichment sessions,” meaning time spent experiencing new toys, tastes, and smells, where pumpkin play is leading the charge. There’s even a tiger carrying a little Jack-o-Lantern in her mouth that you absolutely need to see. 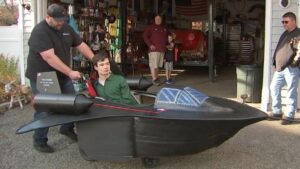 For the best costumes, check out what one dad, Tom Hardy, made for his son, Tommy. Tommy has cerebral palsy and autism, and while he loves trick-or-treating, finding wheelchair-inclusive costumes has always been difficult. Because of this, Hardy started constructing elaborate Halloween costumes to fit his son’s wheelchair on his own. This year, Tommy is trick-or-treating as the US Air Force SR-71, which is the world’s fastest aircraft.

Finally, if you received a scary amount of candy yesterday, check the link here for all the places you can donate to, including the troops, children in need. Want to keep it local? Check with your nearby nursing homes, homeless shelters, food pantries, and soup kitchens to see if they are accepting donations!

Padre Joao Paulo de Araujo Gomes has some special friends on the altar with him as he celebrates Mass: stray dogs living in the Brazilian city of Gravata. Padre Gomes hopes that allowing the pups to hang around the church during services will raise awareness of the plight of the city’s many homeless pups, and encourage people to adopt them. His church is always open to wandering dogs in need of rest. Padre Gomes and other volunteers have set up food and water stations outside the church, and Gomes also shelters strays in his own home, taking care of critically ill dogs. “Caring for animals and nature as a whole is a great gesture of love for God, humanity and the planet,” he says. Read more.

Chick-fil-A Employee Goes Above and Beyond… and Underground 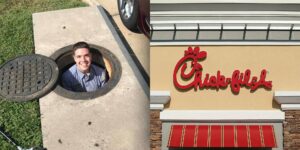 We’ve all heard how Chick-fil-A employees are known for their customer service, but one employee recently took that to a whole new level. Last week, a customer in Fredericksburg, Virginia dropped her phone down a storm drain, and one Chick-fil-A employee didn’t hesitate to help. Seth Ratliff had just gotten off his shift, when a customer came in begging for someone to help get her phone. When Ratliff heard this, compassion took over, and he leaped into action. He climbed into the manhole armed only with a grabber and determination. After slicing his finger and getting covered in muck, he emerged victorious, phone in hand. Needless to say, the customer was overjoyed and Ratiff definitely deserves a raise. Read more.

At 17 years old, Shreyaa Venkat is more than doing her part to help her community. She founded a nonprofit organization, NEST4US, which has helped tens of thousands of people in the U.S. The organization features four different volunteer programs: Nurture, Tutors, Kares, and Buddies. The “Nurture” program helps thousands of homeless people in the DC area, “Tutors” offers kids free help with school, “Kares” collects supplies for at-risk kids, the homeless, and those in need of disaster relief, and “Buddies” makes sure low-income kids never go without on their birthdays. She runs all of these programs while finishing her senior year of high school! Read more. 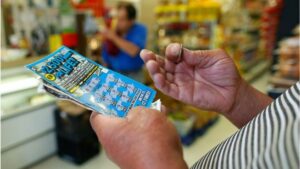 Retired DMV worker Ronnie Foster was on his way to the hospital for his final round of chemotherapy for colon cancer, when he spontaneously decided to stop and buy some lottery tickets. When he scratched the tickets, he was shocked; he had won a $200,000 prize. When he scratched the numbers, he couldn’t believe it until a clerk’s scan confirmed his prize. Now that’s one lucky day. Congrats, Ronnie! Read more.