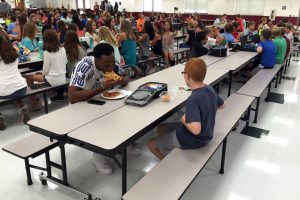 One football player’s small act of kindness is making a big impact. FSU wide receiver Travis Rudolph was visiting a Tallahassee middle school with his teammates when he noticed Bo, an 11-year-old boy with autism, eating alone in his school’s cafeteria. Rudolph sat down with his pizza, and the two chatted through lunch. After seeing a photo taken by a school employee, the boy’s mother, Leah Paske, was moved to tears. “That’s all you need—small acts of kindness,” she said. “And it can be life-changing for somebody.” Read more.

It’s one thing to have a sibling in the same school as you, but how about your 82-year-old grandfather? Melanie Salazar is beginning her freshman year at Palo Alto College, while her grandfather Rene Neira is finishing his associate’s degree in economics. Mr. Neira left college in the 1950s to work and raise a family, but he never gave up on his education. He even plans to work on his bachelor’s degree from University of Texas at San Antonio the following year. Read more.

It was a tough match at the Junior Soccer World Challenge in Japan, but when the Barcelona under-12 team defeated the Japanese squad 1-0, the celebration also lent itself to a stunning display of sportsmanship. When the Barcelona team noticed the Japanese players mourning their loss in front of their home crowd, they decided to comfort their rivals instead, offering hugs and words of encouragement. Read more.

John McMillan’s fish and chips restaurant in Lethbridge, Alberta, had fallen on such hard times that Mr. McMillan couldn’t even afford to pay himself. But his luck turned when Colin Ross stopped in, thinking that some fish would help cure his hangover. Ross quickly fell in love with the restaurant and its 69-year-old owner, and crafted a Facebook post asking people in the area to support the establishment. The post paid off big time. The business welcomed over 900 people in just two days, and hopes to continue its upswing. Read more.

Do you have a hobby that some might find a little weird or out of the ordinary? Well, when 7-year-old Nicole Spencer was teased at school for her love of insects, her mom reached out to other bug lovers for help. More than 80 letters of support and encouragement from entomologists (professional bug lovers) came after the Entomological Society of Canada put out a call on Twitter: “A young girl who loves insects is being bullied & needs our support. DM your email & we’ll connect you! #BugsR4Girls.” Three cheers for bugs — and everyone who loves them. Read more.