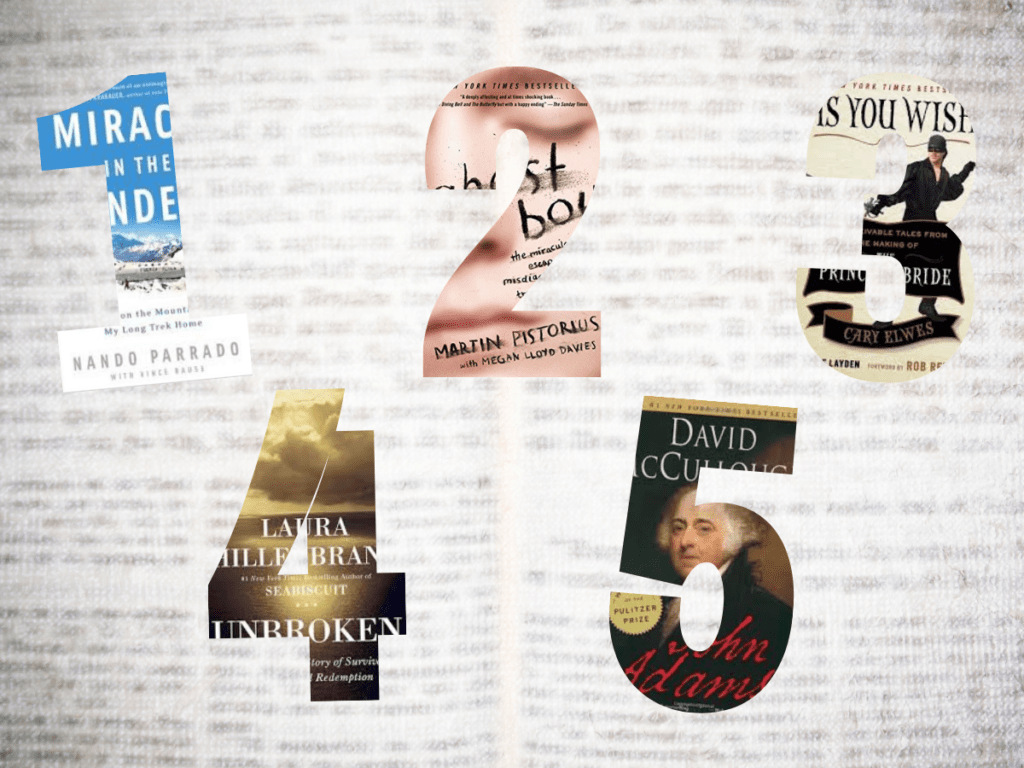 In the midst of the polarizing politics and global health crisis of the past year, disappointment in our fellow humans feels like it’s at an all-time high. These days, I for one could use a reminder that people are, in fact, capable of more spectacular feats than epic arguments on social media.

RELATED: Uplifting Stories of the Week

The truth is, we humans have a pretty amazing history of strength, endurance, compassion, and selflessness. That’s why, this year, I’ve decided to get more intentional about my reading choices. I’m focusing on encouraging books that highlight truly inspiring men and women—my own personal, bibliophile version of People Are Awesome YouTube videos.

As a book lover, I’ve sampled plenty of such inspiring stories in the past. Here are five favorites that have left me marveling at the awesomeness of real-world people.

“Miracle in the Andes” by Nando Parrado

If you’ve ever seen the movie “Alive!” you may know the story of the Uruguayan rugby team whose plane crashed in a remote stretch of the Andes in 1972. (You might also associate it with cannibalism, but stick with me here.) Nando Parrado was one of the young rugby players who survived the crash and spent two months fighting to stay alive amidst unthinkably harsh conditions. “Miracle in the Andes” is his incredible first-person story of not only enduring starvation, injury, and loss, but striking out with a fellow survivor to descend the Andean peaks on a treacherous journey toward safety.

Although it was months ago that I read this book, I still frequently call to mind how, when Nando felt he couldn’t take one more step, he’d ask himself to just go a little further. To me, it’s a powerful illustration of the fact that we are all stronger than we think.

When South African Martin Pistorius was 12 years old, he developed a mysterious illness that suddenly left him wheelchair-bound and near-comatose. For the next 13 years, Martin languished in homes for disabled children, given up by doctors as “vegetative”—until the care of an attentive caretaker began to draw him out.

Gradually, Martin fought his way back to communicating with others through visual signals and the help of a speech computer. Although he never regained the ability to walk or speak, his mind remained sharp. Martin eventually pursued a career in web design, fell in love and got married, and developed a strong Christian faith. Want a preview of his amazing story? Watch his inspiring TED Talk here.

“As You Wish” by Cary Elwes

It’s hard to name a more beloved movie than “The Princess Bride.” Ever wonder if the magic was as real behind the scenes as it appears on screen? I’m happy to report that the answer is yes! In this delightful memoir, Cary Elwes, who played leading man Westley in the film, recalls the making of the classic movie in loving, nostalgic detail. Anecdotes of Andre the Giant’s legendary generosity and how Elwes and his leading lady Robin Wright really enjoyed their kissing scenes will warm the heart of any true fan. I’ll never watch the movie the same way again.

I’m a sucker for survival stories—and “Unbroken” tops my list in this genre. This true story of the extraordinary life of Louis Zamperini reads like an action movie. (It’s no surprise the book was made into a film by the same name.) Zamperini competed in the 1936 Olympic games as a distance runner, then joined the military during World War II, only to be shot down over the Pacific. After surviving at sea for 47 days, he washed ashore on the Marshall Islands, where he was taken prisoner by the Japanese. In Japan, he suffered mercilessly at the hands of a prison guard who singled him out for excessive punishment.

After so many trials, Zamperini fell into a deep depression. But in 1949, he attended an evangelistic crusade led by Billy Graham, where he experienced a dramatic conversion to Christianity. Zamperini subsequently opened wilderness camps where at-risk boys could find hope and healing. Zamperini’s story always reminds me that God can heal and redeem even the worst suffering.

If you ask me, our nation’s second president doesn’t get enough credit. At least, that’s what I believe after having read David McCullough’s extensive biography “John Adams.” This founding father and his ever-faithful wife Abigail lived lives of service and sacrifice that paved the way for freedoms Americans enjoy to this day.

As I read this book during the contentious 2020 election, I found it reigniting the flames of my own patriotism (despite the disappointing headlines of the time). I joined in the thrilling concept of founding a nation on principles of liberty and equality. I marveled at Adams’ ability to sustain a lasting friendship with Thomas Jefferson after decades of intense rivalry and betrayal. And, if nothing else, I’ve carried with me Adams’ motto, adopted even after his loved ones had died and he was suffering the infirmities of old age: “Rejoice evermore!”