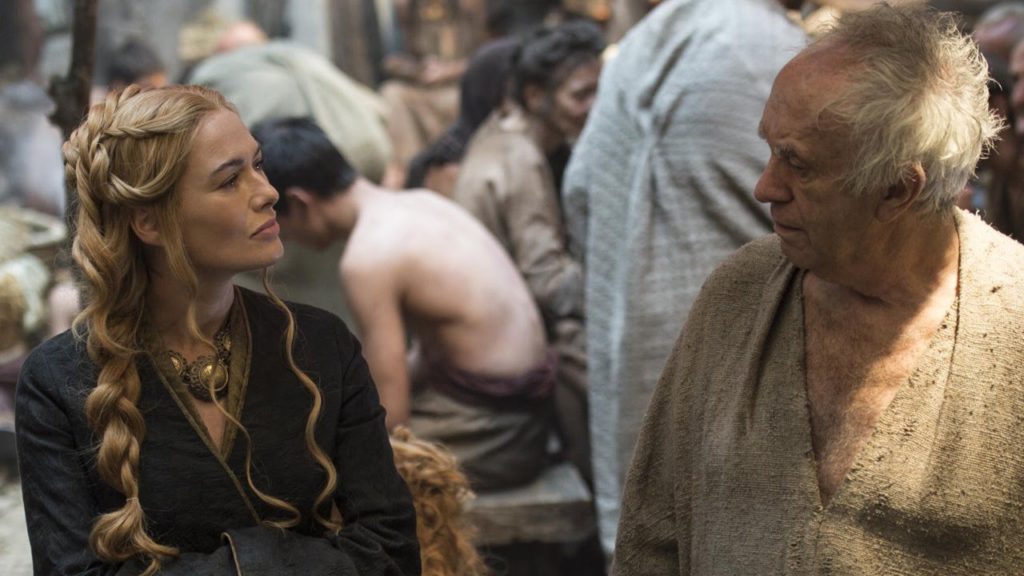 One final time, winter is coming. Sunday, April 14, “Game of Thrones” returns to HBO for its eighth and final season, bringing George R.R. Martin’s often grisly, complex, and fantastical world back to the small screen for what’s sure to be an epic fire- and ice-filled finale.

“Game of Thrones”—especially in book form—is far more a story about a world than it is about any particular character. (That could be why George R. R. Martin so carelessly disposes of so many of them.) And when you’re exploring a world, you necessarily bump into politics, culture, language, religion, which makes the show often unsettlingly relatable. It’s on this last theme I’d like to reflect: For me, religion in “Game of Thrones” has become far too unsettlingly relatable.

FEATURED: When Religion Doesn’t Fit: Learning Through Doubt and Discovery

The idea of religion, faith, and spiritual leaders manipulating—and being manipulated for—politics and power is nothing new. Indeed, in the Catholic tradition, there’s a tragic history of political ends being pursued through violent means, all in the name of religion. But Pope Francis, constantly calling us to go to the margins of society, to lift up those in need, and embrace nonviolence toward all of creation, has given us a fresh lens on the Gospel.

Just a few seasons ago in “Game of Thrones,” you may have thought—as I had hoped—that the High Sparrow was going to be a Pope Francis-style figure in the series, breathing a preferential option for the poor into the corrupted world of Westeros. There are more than a few similarities between the pontiff and the septon. Both dress simply; both roll up their sleeves to do the often dirty work of living out faith among real people; both preach in ways that make the rich and comfortable uncomfortable.

RELATED: 5 Keys to Success from ‘Game of Thrones’

And yet, as we now know, the High Sparrow had something of his own agenda. And while he met a rather explosive end before HBO could flesh that agenda out in its entirety, to me, the most troubling part of the High Sparrow’s manipulations was the underlying threat of violence. It was all talk of mercy and redemption until you got a spear through the eye—or spent weeks on the wrong side of an unjust judicial system.

Now, I’m no stranger to religious history. The High Sparrow’s encouragement of the Faith Militant—a sect that imposed the teachings of the Faith of the Seven by way of blade and blood—is perhaps not a shocking plot development, especially as we compare the history of Westeros to our own history: colonialism, the Crusades, the Inquisition, and more.

But it did give me reason to pause. The High Sparrow and Pope Francis do have a lot in common—and I like what Pope Francis points to quite a bit. I wonder, had I been a citizen of Westeros, would I have liked the High Sparrow’s teachings, too? Would I have been entranced by his simple lifestyle? Perhaps. But secret agendas aside, a key difference lied in the very visible militia the High Sparrow employed to enforce his bidding. The High Sparrow’s teachings feel false and hollow if, when a plea for mercy fails, he simply sends in an assassin to remove the unrepentant, or locks them up in a tower cell until they cave to his wishes.

Now, before you accuse me of carrying on this fantastical comparison for much too long, here’s the point: A life of simplicity, teachings on mercy and love, inclusivity, and care for all—those things are hard. Those things are messy. Those things can be dangerous. And not everyone is going to be onboard. But that’s the trick to a life of faith.

RELATED: Why You Need to See the Pope in Person

Think back to the end of season five, when Cersei Lannister was forced to walk naked and alone through the streets of King’s Landing after weeks of imprisonment. For as much as we may despise Cersei for all her manipulations, her selfishness, her violence, this was a difficult scene to stomach. Where were the High Sparrow’s mercy and love in this moment? All we heard was, “Shame, shame, shame.”

Imagine if Pope Francis had the power to arrest and imprison those world leaders with whom he disagreed. Imagine if he did so, claiming that it was for the betterment of their souls. How would this make us feel? I for one would be a bit less impressed with the pope’s teachings on mercy, dialogue, and the messiness of faith. Indeed, such an act removes any mess at all from the life of faith, tucking it away in a corner where it can’t be seen or heard from, removing all varying—even if challenging—points of view.

What makes a true life of faith, what makes true spirituality, is that radical turning to the other, that desire to reach out to those with whom we disagree.

This radical way of life is certainly hard to find in the pages or the scenes of “Game of Thrones,” but it need not be so in real life. Perhaps before we tune in April 14, we do a quick check-in with ourselves: How are we living lives of mercy, dialogue, and radical encounter with others?