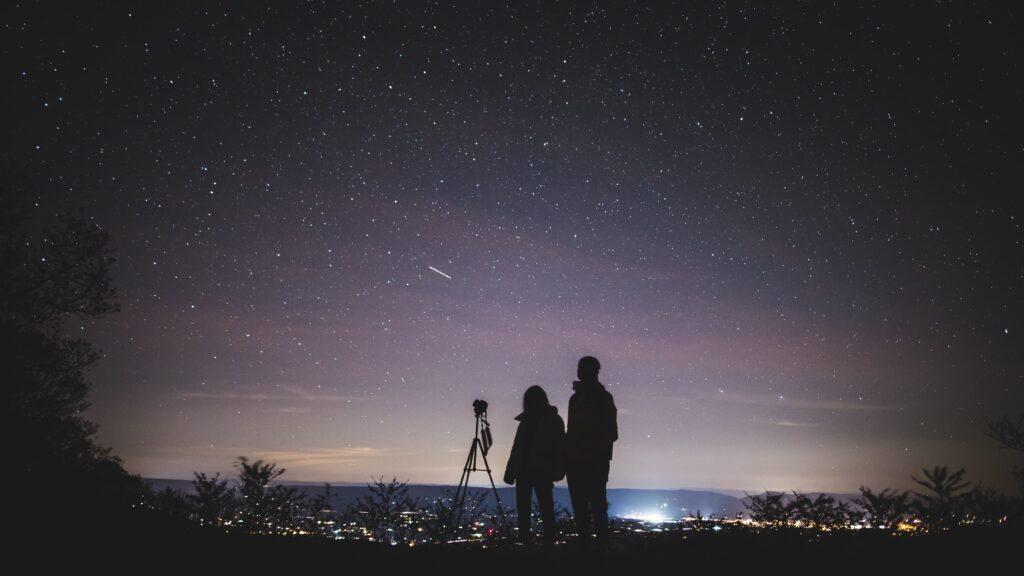 “Let’s go a little farther,” my dad said as we walked along the dark, empty road in the semi-rural Pennsylvania neighborhood where I grew up. When we reached the top of a small hill, he paused and told me to look up. “Do you see that? Over there? That’s the Big Dipper.” I tilted my head backward to look up at the constellation he was pointing to. “Do you know what that one is?” he would ask, gesturing to another collection of twinkling stars. “That one is called Ursa Major.” We stood there in silence for a few moments and for the first time, I began to grasp just how vast the universe was — so much more so than I could comprehend at 7 years old.

As the daughter of a dad who climbed Mount Kilimanjaro, competed in the Boston Marathon, and launched his own small business without certainty it would succeed, I learned the value of seizing moments and attempting both great and small feats. My dad never has been one to throw caution to the wind, but rather to determine which way the wind was blowing and adjust his sails accordingly. He taught me to do the same. He always encouraged me to strive to achieve my best by setting goals for myself and then, by putting in the time and work to bring them to fruition.

When I developed a serious illness as a teenager, my mom was the one who helped me most with my daily needs, but my dad drove me to doctors’ appointments — even when they were several states away — and tried to ensure that I had the best care we could access.

My father was the breadwinner in the family and made financial sacrifices to pay for my medical care — like when it was recommended that I try an expensive experimental drug that wasn’t yet covered by insurance. After I joined support groups for other young people with serious illnesses like mine and understood that many people struggled to access even basic medical care, it made me even more appreciative that my father was supportive.

Years later, when I was finally healthy again after a decade of being sick and homebound, my father invited me to travel with him and my mom to visit my brother and his growing family overseas. My father always encouraged having strong family connections. I witnessed that by how he helped his parents and sisters.

When my aunt was dying of cancer, he took care of many of her personal affairs so that she could pass in peace knowing that her life was in order. While my grandparents were alive, he took them on many trips throughout the U.S. and Europe, so that they would have a chance to see the world, too. It wasn’t something they likely would have pursued as fervently on their own. He showed me that traveling as a family is an incredibly bonding experience. I am hopeful that one day, I again will have the opportunity to make these kinds of special memories with my brother and his family.

A love of reading is another gift that has been passed down to me. When I was a kid, my father had my brother and I recite poetry every night after dinner. At the time, I grumbled about it because I wanted to go watch TV and chill out before bedtime. But, it turned out that I was gaining an appreciation for the lyricism of the great poets — I can still recite “Blue Roses” by Rudyard Kipling from memory. And, I gained a comfort level with public speaking that came in handy whenever I had to present an oral project to my class in school. I’m grateful my father taught me to gain as many life skills as I could because they’ve been so useful in unexpected moments.

Last but certainly not least, my dad taught me the personal satisfaction that can be found in setting and achieving goals. When I decided to return to school as a non-traditional-age student, it was nerve-wracking and exciting. My father had earned a master’s degree before I was born and instilled the expectation that my brother and I would pursue higher education. Because of that, I was clear that I wanted to earn advanced degrees and gain as much as I could from the experience. While I earned the good grades I set out to achieve, what I came away with was even more precious to me — a whole new way of seeing the world and a deep curiosity to learn more.

The Greek philosopher Plutarch said, “The mind is not a vessel to be filled, but a fire to be kindled.” My dad taught me that as I learn and grow, the light that emerges from the fires I have kindled are the same ones that will illuminate my path forward. Looking back now as an adult, I understand better why my dad encouraged a love of learning and travel, a commitment to family and personal growth and a positive outlook. These elements have both enriched my life and made it easier to face whatever comes with knowledge, determination and grace.