If you grew up reading Calvin and Hobbes, you too have your favorite strips hung on a wall in your mind, instantly recalled at the sight of a red wagon or cardboard box. You remember the snowgoons, the transmogrification… the not-being-able-to-understand-the-big-words-but-thinking-it-was-funny-anyway. But it was more than just funny and undeniably adorable (the series’ final strip could make a statue cry) — it was relatable and true to life. Maybe we were too young to realize it then, but looking back, we can see Calvin and Hobbes snuck some important life lessons in between the jokes.

Calvin is a little more philosophical than any of us probably were as children (I spent all my brain power on becoming a professional Pokemon trainer). But he shows something universal to people of all ages: curiosity. Calvin always explores his curiosities, sometimes through his wagon talks with Hobbes, and sometimes by literally exploring (Yukon Ho!). Calvin shows us we’re never too young or inexperienced to dive into the deep stuff.

What goes around comes around

As much as we all root for Calvin, he’s not always the most moral of characters. He constantly brawls with Hobbes and even forms a club specifically to alienate Susie (Get Rid Of Slimy GirlS). Then again, he’s a six-year-old boy. But over and over — from snowball smackdowns to water balloon wallops — we see that people who only think of themselves usually end up getting what they deserve.

Life is all about perspective

Calvin’s world is whatever he makes it. Whether it’s as Spaceman Spiff venturing to a new planet or as a dinosaur destroying a town, Calvin lets his imagination take over to make life more fun. This doesn’t necessarily mean we should daydream ourselves into different worlds, but realize that we have the power to choose our perspectives. Maybe a 6-year-old’s imagination is exactly what we need. 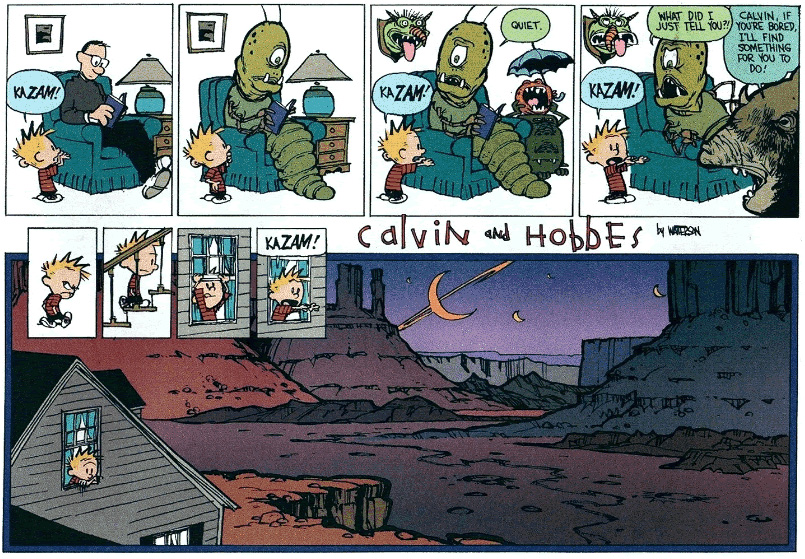 Make your own fun

Calvinball is the epitome of making something out of nothing — all it takes is a little creativity. Even after childhood there are opportunities for our own versions of Calvinball every day. When you’re stuck in traffic or doing any mindless task, that is a prime time to make your own little game and turn boredom into fun. (I know I’m not the only one who talks in funny accents while I drive.)

What it means to be a best friend

Even though the entire relationship may be a figment of Calvin’s imagination, it’s hard to think of a more wholesome friendship anywhere in pop culture. They assault each other with water balloons, snowballs and insults, but in the end Calvin always takes care of Hobbes, and Hobbes is always there for Calvin. Many things may go wrong in a friendship, but one thing is constant with a best friend: In the end, they are always there.