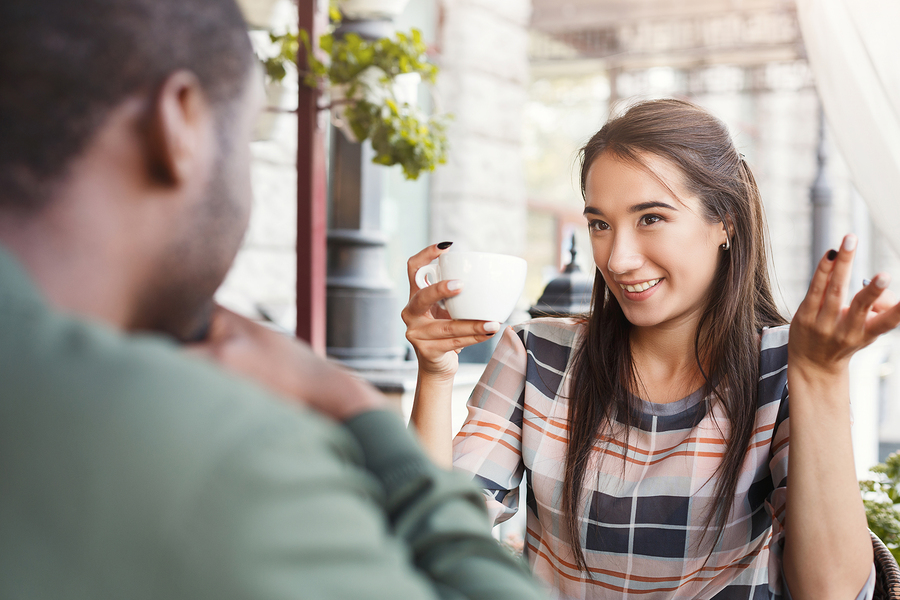 I was on my second date with Doug, and things were going really well! There was a lot of eye contact, I had made him laugh, and I felt like my hair game was incredibly on point that night. So, when he casually asked me about my dating history, I thought this was an invitation to really get to know each other. I went into the full history of my last relationship – how it had started, what was good about it, what was bad about it, and how it eventually ended. I am not going to lie – there may have been some tears. Afterward, I felt so much closer to him and like we had really connected. Doug, on the other hand, did not feel the same way. We split the check, and I never heard from him again. Not even my amazing hair was able to save that date.

I am a chronic oversharer. There isn’t a feeling that I don’t think needs to be expressed, a thought that I don’t want to discuss, an emotion that I don’t believe needs to be dissected. Vulnerability and openness are being touted by writers like Brené Brown and Glennon Doyle as the keys to good communication with one another. I saw this as my opportunity to do what I always wanted to do: Share with no emotion left unturned. Which didn’t work out as well as I had hoped — something that all of these writers didn’t warn me about. (OK, actually, they did, but I was so amped to start sharing I stopped reading.)

In my friendships, my oversharing didn’t have too much of an impact, but in my romantic relationships, I could basically hear the record stop after I had said too much, too early. It was a lose-lose, and I didn’t want it to happen again, so I came up with some guidelines to keep me from making myself too vulnerable, too soon.

1. You don’t always need to get deep

You and the person that you’re dating are still in the honeymoon phase, those glorious three or four weeks. There are so many awesome things that they don’t know about you that aren’t your deepest, darkest secret. Like the first thing you do when you get up in the morning,  a song that always makes you happy, or the best vacation you’ve ever been on. These are easy, fun, and interesting things to ask and to share with a new romantic partner and can help you to learn a little more about who they are.

2. When your partner speaks, really listen

As an oversharer, I have an aptitude to listen to someone else’s story and immediately want to relate to them by telling a similar personal story. What that can unintentionally do is make the other person feel like I wasn’t listening, and instead, I was just waiting to talk about myself. When we are quick to speak after someone else has made themselves feel vulnerable, it can make them shut down and be less likely to open up again. So when they share, you can say something like, “I understand exactly where you’re coming from” or “I have been there myself.” Or if they seem open to it, gently ask them follow-up questions.

3. It never hurts to ask

It may feel weird, but asking your partner if they are okay with talking about deep emotions or stories isn’t a bad idea. I was in a near-fatal car accident a few years ago, and it is always a real doozy of a thing to bring up on a date. So, when asked why I didn’t run or didn’t ski, I would answer, “It’s sort of a heavy answer, and I am totally comfortable talking about it now, or another time – you just let me know.” It allowed me to manage their expectations, to give them an out, and for me to be in a position where I wouldn’t shock them completely if I shared what had happened to me.

4. Let them set the pace

For me, intimacy is gained by learning about the person who I’m dating and sharing parts of who I am with them. But I now know that isn’t true for everyone. Sharing too much too soon would leave me feeling sad and empty if it wasn’t received well. Holding off on telling my deepest, darkest feelings and emotions, and instead waiting for my partner to share how they are feeling before I go all in, has allowed me to shift from being an oversharer to an attentive listener. I get to be the person who my partner goes to when they need someone to be there for them, and in turn, I can share how I’m feeling with them. We can get into deeper, more serious talk at a pace that feels comfortable, which allows me to feel confident that what I have to say will be well received.