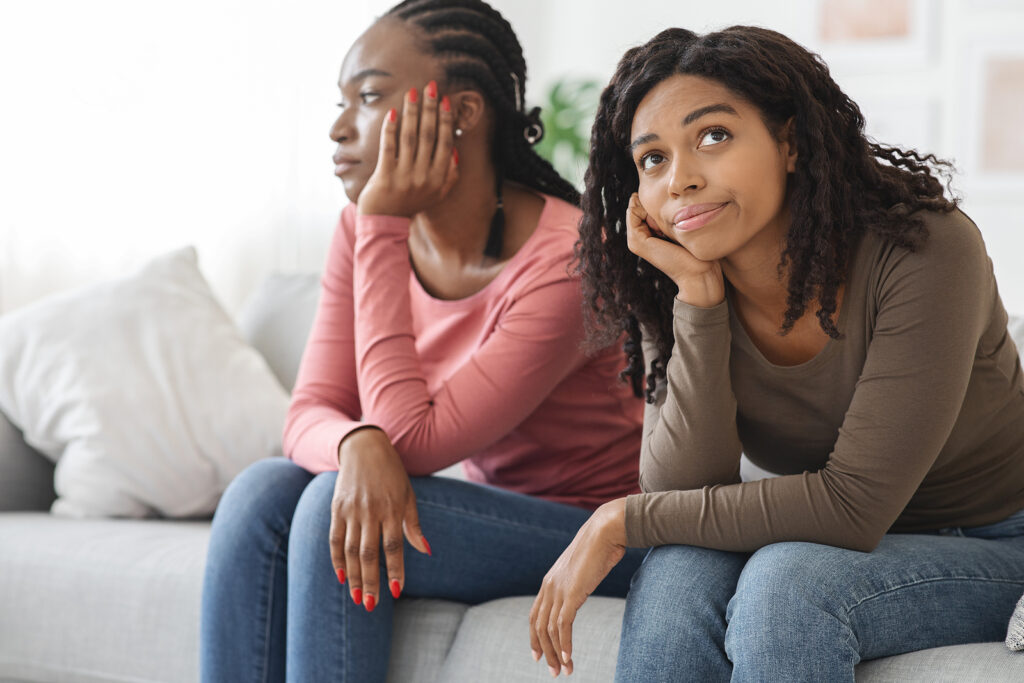 I had faced months of annoyance and frustration with my longtime roommate, who was not communicating as well as she usually did, specifically when it came to hosting guests in the apartment. We were four years out of college and had been roommates that entire duration, so we had learned to live well together without any major issues.

However, our communication issues began to affect both our friendship and our living situation, and after months of venting to other friends, I finally worked up the nerve to gently approach her. I have always had a hard time with confrontation, but I knew that if I continued to ignore the issue, nothing would be solved.

RELATED: How to Create Loving Boundaries with Others

I worked up the nerve to ask for more transparency about when and for how long guests would be over in the apartment, and to refrain from having guests in our apartment if neither of us were there. I carefully expressed my need to my friend and expected a response of understanding and acceptance. Instead, my request was met with frustration, defense, and an eventual refusal. The time and intention I had put into communicating this need now seemed wasted, and I was left feeling insecure, selfish, and confused.

Immediately, I regretted even asking. I began to think that I was being too needy or irrational. I replayed the conversation over and over, wondering what I could have phrased better. I wanted to avoid my friend and pretend it never happened.

But after a while, I began to feel angry at my roommate for refusing my request. After about a week, I was able to digest the conversation, repair hurt feelings, and turn it into a period of growth for our friendship. I could finally move past resentment and towards understanding. Here are a few steps I took after my request for a boundary was denied:

Hear the other person out and take some space

First and foremost, empathy is necessary in order to understand why the other person felt the request for a boundary was unreasonable. An empathetic response did not happen during our first conversation. Instead, as soon as my request was met with defense, tensions rose quickly and we both shut down instead of voicing our actual needs. I reacted to her lack of empathy with my own lack of empathy as a response. Neither was productive.

RELATED: The Benefits of Boundaries

I decided it was best that we take a day to reset and revisit the conversation later. As the week went on and we each had space to calm down, we could talk more respectfully about where we were coming from. I listened to my friend express why she felt the boundary was too harsh. Specifically, she felt that I had often behaved similarly inviting guests over without being there, and she felt it unfair that I should ask her to change the same behavior.

I began to understand why she felt hurt. I also had a chance to clarify my initial request and emphasize my intentions for asking for more communication. Once we shared an understanding, we could start to work on repairing our relationship.

See if the other person is open to a compromise

Although the initial refusal hurt me to hear, I wasn’t willing to give up on negotiating a boundary because I still felt it was necessary. Once we talked through the issue, we were able to reach an agreement that worked for both of us. She would give me more of a heads up via text or phone call when guests were over without her being there, and we would both give each other a little more grace in our living choices. Thankfully, we were open to being a little more flexible to ensure the other person felt comfortable.

Lay the groundwork for the future

Looking ahead, I now know that prior to asking for a change in our relationship, I need to take into account the other person’s feelings, not just my own. No matter how carefully you phrase asking for a boundary, it could be met with frustration.

However, no one should feel ashamed or embarrassed for expressing the need for one. I had to remind myself of this when I initially felt hurt and upset. My first instinct was to apologize and ask her to forget I even asked. Boundaries, however, are essential to maintaining relationships, and I had to remind myself that my request was valid and honest.

Thankfully, my friend was open to negotiating and we found a way to honor both our needs. I learned that it takes time to reach an understanding, and patience is necessary to give the other person time to process the request. I am glad I asked for the boundary, but I now know that in order to bring it to fruition, the other person has a right to push back and offer suggestions.

In the end, this conversation, while difficult, has enhanced our communication as friends and roommates, and has made us both more comfortable voicing our needs going forward.