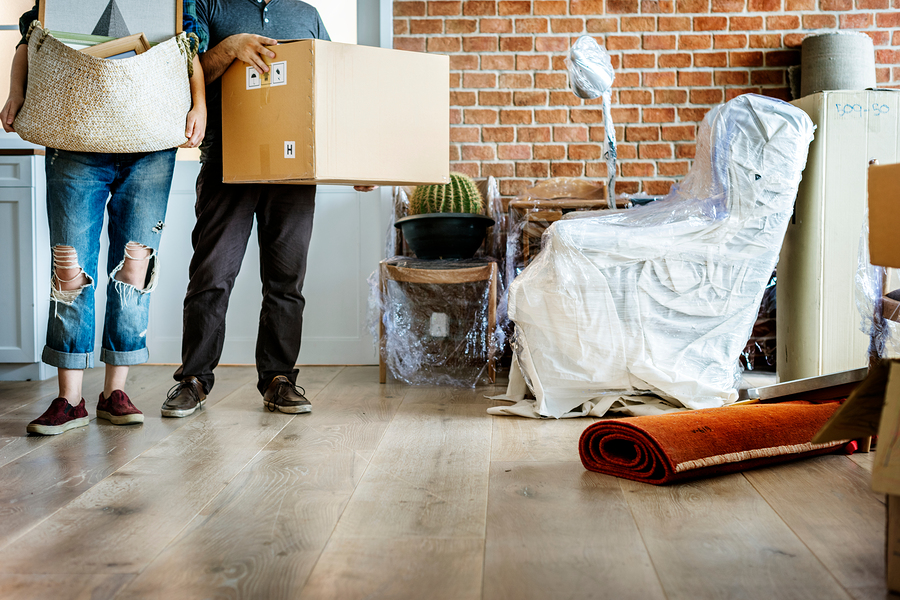 I’ve lived in New York City for three years and have lived in five different apartments. So, (unfortunately for me because it’s The Worst) I know a fair amount about moving. More specifically, I know what not to do. And as someone whose collection of stuff has gotten smaller and smaller with each and every move, number one on my “don’t” list is: Don’t bring extra crap with you when you move.

I’ve learned the hard way that you can always minimize more than you think you can. In past moves, I’ve found myself frantically packing last-minute as the moving truck pulled up outside, paying an absurd hourly rate for movers, only to get rid of a good chunk of my possessions after I settled in, and have kept a certain item because I knew I couldn’t possibly live without it, only to forget I had it until I start packing for the next move.

Here are the tips I follow that will hopefully help you clean out before you move out.

Let your friends shop your closet

Most people I know, myself included, declutter their closet before a move and donate what they no longer want. However, as someone who’s looking to chop as many minutes as possible off a move when paying movers by the hour, I prefer to be even more cutthroat with my closet.

One way to do this is to let your friends go through your clothes and pick out some pieces they like. This works especially well if you separate the clothes you adore from the rest of your wardrobe. Usually, if something’s in my “maybe donate” pile and a friend is clearly way more excited about a top or jeans or dress than I’ve ever been, it’s less difficult for me to let it go, since I know it’s going to a loving home where at least someone will get my money’s worth out of it.

My roommate and I are both pretty proactive about making sure our apartment is stocked with necessities like toilet paper, sponges, soap, and paper towels. However, during a move these excess products become a hassle: I’m not going to be wasteful and throw them out, but it’s annoying and time-consuming to pack and move them. So, in the months leading up to a move, I’m mindful about making sure I don’t buy more than I can use up before the moving truck arrives. That includes forgoing the megapack of toilet paper and buying a couple rolls instead. It may be slightly less cost-effective in the short-term but will save me some space when I’m packing.

RELATED: How to Adjust to the City After a Big Move

Be honest with yourself in the kitchen

I’m notorious for not being the greatest cook. Let’s just say I’m slightly more likely to appear on “Worst Cooks in America” than “Master Chef.” However, I was blessed with several sets of pots, pans, utensils, and more from kind family members when I first moved to the city. I took all of them with me during my first couple of moves, certain that one day I would change my habits and become the next Alex Guarnaschelli. (Or at least competent enough to make it on “Chopped” to purposefully serve Scott Conant raw red onion and overcooked pasta).

However, before my latest move, I finally was honest with myself. Kitchenware is often the hardest stuff to pack, either because it’s delicate or heavy, and it’s truly unnecessary to keep it around just on the off-off-off-off-off-off-off-off-off (I truly can’t cook) chance I decide to start cooking more.

When you’re packing, only bring what you’ve actually used in the past. The rest can find a new life at your local homeless shelter or Goodwill. And don’t forget to donate any food you’re not taking with you. Here’s a list of where to look.

During my most recent move, my roommates and I were clashing with our old building’s management company (let’s just say a collapsed bathroom ceiling, a missing staircase, and an unidentified human’s tooth were involved). We wanted to review some of the terms in our lease, but in the mess of the move, I couldn’t remember what I did with it. I found the lease a week later in a paper bag where I was storing extra clothing hangers (hot tip for you: Don’t do that with your lease). I could have saved myself the stress (and the giant overstuffed folder of papers I still have) if I had just digitized everything and recycled the hard copy.

For the most part, there’s no need to keep stacks of paper around when PDFs exist. There are free apps for scanning paperwork to your phone, or just take a picture of everything and upload the important docs to your Google Drive for safekeeping.