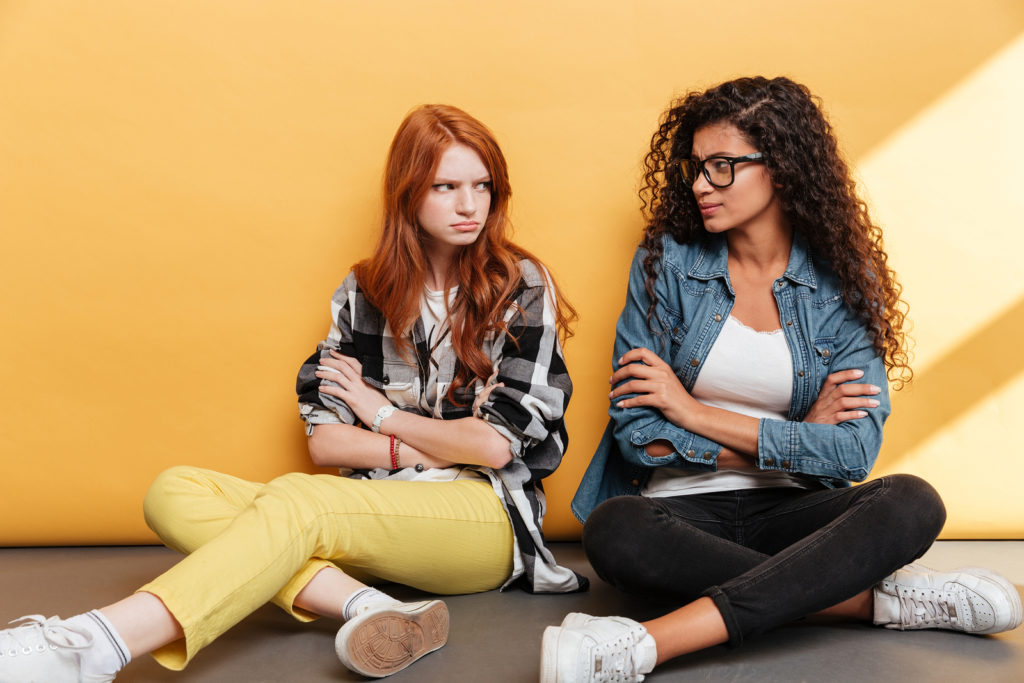 Most of my major problems are food related, like when I’m asked “fried or grilled?” and can’t decide, but I occasionally hit a bump in my friendships too. One memorable argument occurred a few months ago when I told a friend my candid opinions about her boyfriend and expressed concern that he was using her. After weeks of awkward silence, typing and erasing messages, and self-directed Shakespearian monologues about what I should do, she reached out to me, and we settled the issue and hugged it out (after sharing a bag of chips, of course).

Occasional arguments are inevitable, but I’ve noticed that the way you handle them can make all the difference in determining whether or not your friendship lasts. It’s all too easy to succumb to the temptation of pettiness, gossip, and resentment when your feelings are hurt, but don’t let that tarnish your relationship. Here are some tips for when things aren’t so peachy keen with your pals.

When they need to blow off steam, people understandably vent to their friends. However, I would advise against sharing details of the argument with your mutual friends because you risk adding fuel to the fire. When your friend finds out that you’ve talked to others, which they inevitably will, they might speculate about what you shared, how you characterized them, what those friends’ opinions are, or all of the above. This could lead to a sense of alienation, mistrust, or even discomfort that you shared a private matter with people they also interact with.

As anyone who’s been to high school would know, friends often discuss drama amongst each other like a panel on a daytime TV show, and facts can be unintentionally misconstrued in the process. The last thing you want is for a thread of misinformation to reach your friend’s ears and make things worse.

Talking to others is healthy, but unless your mutual friends have a part to play in the unfolding saga, it may not be a good idea to vent to them if you have family or other friends removed from the situation who will listen.

Unsure how to act? Let your feelings develop first

There’s a reason why people tell you to wait before sending an angry email. You may later regret making a decision based off temporary feelings, whether they’re positive or negative. If you have the luxury of time, it makes more sense to let your feelings develop and settle, and to later notice which emotions don’t change as more time goes on.

Certain “plot twists” and revelations will only emerge with the passage of time and could potentially change your course of action. In an ever-evolving situation, people don’t always have all the facts and might want to wait until they can make an informed decision.

If you’re worried that letting time pass will make things awkward or send the wrong message to your friend, you could always later explain your motives for not speaking up immediately. Considering we all sometimes struggle with understanding our feelings, I’m sure your friend will sympathize and appreciate your candor.

Keep an open mind (aka you might be wrong)

This one deserves to be italicized, bolded, and put in size 54 font. Rejecting any constructive criticism and ignoring possible wrongdoing on your end will only stunt a friendship. Criticism and self-honesty are precursors to self-improvement.

The next time you’re in a conundrum, take time to consider how a friend may have interpreted your actions, consider whether that interpretation is valid, and then proceed accordingly. Not only will you increase your chances of rescuing a potentially failing friendship, you’ll hone your empathy skills – it takes a lot of emotional intelligence and reflection to understand other people’s perspectives.

In the end, friendship is one of life’s greatest gifts, and it’s a shame for one to fail because of a problem that both parties could otherwise overlook.