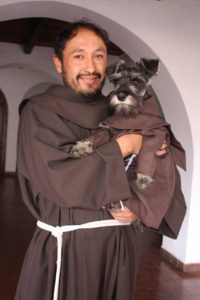 A Franciscan Monastery in Brazil has an adorable new mascot. Brothers adopted a schnauzer from a local animal rescue and named him Friar Bigotón (Brother Mustache). The pup has taken to contemplative life. He has his own tiny robe and spends his days play and running, patrolling the grounds, and preaching to the fish in the monastery’s fountains. St. Francis of Assisi, a known animal lover and founder of the Franciscan Order, would be proud. Read more.

Hip-hop artist Chance the Rapper announced on Monday that he will donate $1 million to Chicago Public Schools. Speaking at a press conference at Chicago’s Westcott Elementary, Chance told reporters that in addition to the donation, his charity will match every $100,000 raised for schools with an additional $10,000. Chance, a Chicago native, is calling on others to join his cause and help the children of Chicago succed. “As a private citizen, as a parent and as a product of CPS, I’m asking that you guys join and fight with me, organize with me, mobilize with me, for the interest of the children of Chicago.” Chance says. “This is the very beginning.” Read more.

Linda Merrill is not your typical grandma who doesn’t know how to work a phone. Everyday like clockwork, Linda sends a selfie to her granddaughter Sierra Sessions, detailing what she is doing with her day. Every picture sent to Sierra also includes the simple and sweet message of “I love you.” Sierra, who lived with Merrill for a time while she was a teen, says that her grandma is “super rock n’ roll” and that the two are “closer than ever” now with the daily selfies. Read more.

After his class failed an exam last year, second grade teacher Michael Bonner knew that he had to do something a little bit different to motivate his students to do well. So he made them a deal: pass the exam, and make a music video. The incentive paid off big time. Not only did the students pass the test, but the video caught the eye of Ellen DeGeneres, who invited them to her show and set up a GoFundMe for the class, which is comprised mainly of students living below the poverty line. Michael’s method of motivation has also proven wildly successful: the class is getting ready to shoot their fourth music video. Read more.

Hundreds of fish, turtles, penguins, otters, and other marine creatures call The Monterey Bay Aquarium home, and just like anyone else, they enjoy receiving a good letter. Last weekend, the aquarium asked people to send mail to residents, with the promise that the staff would read letters to them. So next time you head to an aquarium, consider showing love to your favorite aquatic celebrities by becoming a pen pal. Read more.