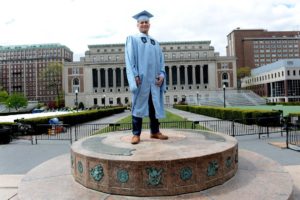 Richard Gamarra spent most of his youth doing things that he regrets. Succumbing to peer pressure, he delved into gang activity and was incarcerated at age 19. During his decade-long incarceration, he came to know Robert Fullilove, a Columbia University professor who taught public health to the inmates at Gamarra’s correctional facility. Gamarra’s intellect stood out to the professor, who encouraged him to apply to Columbia once he was released. Anxious to turn his life around for the betterment of himself and his young daughter, Gamarra beat the odds and eventually made it to Columbia, where he graduates this spring with a master’s in public health. The now 28-year-old Gamarra hopes to use his experiences and his education to counsel and inspire inmates. Read more.

A Champion on and off the Field

Last year, Chicago Cubs first baseman Anthony Rizzo led his team to a World Series victory. Now, he’s showing that he is as generous as he is talented. On Monday, Lurie’s Children’s Hospital announced that it had received more than $4 million dollars in donations from the Anthony Rizzo Foundation. Rizzo, a frequent visitor to the hospital, established the foundation after beating lymphoma. “As a survivor of cancer myself, I know the emotional and financial strain the diagnosis of cancer can put on a family,” said Rizzo. The money donated will benefit the Hope 44 Endowed fund, which provides grants to families of diagnosed children who are financially struggling, and the Child Endowed Fund, which will support specialists that help reduce anxiety for patients during their hospital stays. Read more.

Boy Gets the VIP Experience After Donating Comic Books to Soldiers

Carl is a young boy with big ambition and an even bigger heart. At just 9 years old, he runs a website all about his favorite hobby: comic books. Earlier this year, Carl came up with the idea to spread his love of comics by donating comic books to veterans and soldiers deployed overseas. He managed to collect 3,500 comic books, 300 of which were from his own collection, and started making his donations at the Lyons Veterans Hospital in Basking Ridge, New Jersey. His next stop, Joint Base McGuire-Dix-Lakehurst in Trenton, gave him quite the surprise. Upon Carl’s arrival, he found several high-ranking officers who wanted to give him a VIP tour of the base, which including trying on gear and sitting in a helicopter. He also received three medals of excellence. Carl had a blast, saying, “I do not think I have ever felt as special and welcome as everybody at Joint Base MDL made me feel!” Read more. 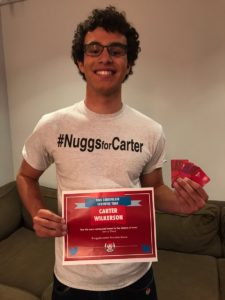 Step aside, Ellen Degeneres, 16-year-old Carter Wilkinson has topped you for most retweeted post of all time. What was his motivation? Free nuggets. Carter asked Wendy’s official Twitter account how many retweets he needed to get a year of free chicken nuggets. When Wendy’s responded with the number 18 million, Carter was off to the races, starting the #NuggsforCarter campaign. His initial tweet on the matter broke Twitter’s record, with just over 3.5 million retweets. While not quite up to Wendy’s original request, the fast food chain found the feat adequate enough to award Carter his free year of nuggets, as well as donating $100,000 to the Dave Thomas Foundation for Adoption. The moral of the story? Chicken nuggets sure are amazing. Read more.

Oldest Nurse in the Country Turns 92

The oldest working nurse in the country, Florence “See-See” Rigney, tried to retire once at age 67. It didn’t stick. This past Monday, she turned 92 and spent the day, of course, at work at Tacoma General Hospital in Washington. See-See likes the work, saying it helps keep her brain “stimulated,” especially with the constantly changing technology. Surprisingly, hospitals weren’t yet using computers when See-See graduated from Tacoma General Nursing School a little after World War II ended. See-See says she still plans on retiring, but, given that she’s been at this job for over 70 years now, it must be hard to let it go! Read more.