Getting Married? Rent a Llama for Your Big Day 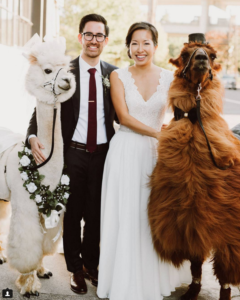 Just when you thought Portland, Oregon couldn’t get more hipster, they bring in the llamas. Happy couples in Portland and Vancouver, Washington can now choose to spend their wedding days with bridal veil and bow tie-clad llamas. Mtn Peaks Therapy Llamas & Alpaca offers a rent-a-llama service, starting at $200, that allows wedding parties to celebrate the big day with these furry creatures. It would certainly make for quite the photo op. The only problem with this investment is that these llamas may just steal the spotlight from the happy (human) couple. Read more.

The children are our future, and a video showing young students reacting to their classmate’s new prosthetic proves it. 7-year-old Anu, who lives lives in Great Britain, recently received a new prosthetic leg from the National Health Service program. The new leg, called a running blade, caused quite the excitement among her classmates. When Anu, who has used a prosthesis her whole life, strolled onto the playground, her peers erupted with enthusiasm. The video of the greeting has gone viral and made many a grown adult shed a tear. As for Anu, she’s hyped about the leg for a couple of specific reasons: “It makes me run faster and do my street dancing faster.” Read more.

Family Adopts Six Siblings to Keep Them Together

Where there is room in the heart there’s always room in the house, at least for Ohioans Christopher and Christina Sanders. Last week, the family of seven expanded to a family of 13 when the adoption of six siblings they started fostering in 2014 went through. Christopher gives credit to his wife, saying, “Her heart is huge, and it’s starting to rub off on me.” The kids range in ages from 9 to 16, and they’re all grateful and excited to be an official part of the Sanders family. Read more.

After Injury, Horse Begins New Career as a Painter 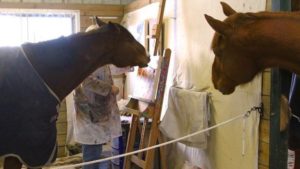 When their beloved racehorse Metro developed woodchips in his knees, Ron and Wendy Krajewski realized that his racing career was at an end. However, this left ample opportunity for a career change. After noticing how much Metro loved to bob his head and put things in his mouth, Ron provided him with a paintbrush and an easel. To Ron’s surprise, Metro fell in love with his new hobby, and his unusual ability attracted nationwide news. As a result, Metro’s pieces have been in high demand from art collectors. His sales have even funded a new experimental treatment for his knees! Read more.

Crazy Socks with a Crazy Good Cause

There’s never a time in your life when socks won’t be useful, and now there’s a new company whose crazy designs and giving spirit will make you want to add to your collection. John’s Crazy Socks is a new business run by John Cronin, a 21-year-old with Down Syndrome. John started the business because he had one mission: “Make people happy through socks.” The company now has over 850 styles and designs, and each order includes a special note from John and as well as a piece of candy. A portion of the proceeds goes to charities like the Special Olympics or Autism Society of America. The company is projected to make as much as a million dollars in revenue in its first year, a fact made even more impressive since a total of $0 has been spent on advertising. Read more.