Man Runs Marathon with the Person who Saved His Life 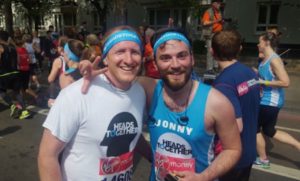 In 2008, Jonny Benjamin stood on edge of the Waterloo Bridge in England, ready to take his own life. Neil Laybourn saw Jonny standing on the edge of the bridge and talked to him for 25 minutes until medical professionals arrived. The two weren’t in touch again until 2014, when Jonny launched a social media campaign to try and find the kind stranger who saved his life. Now, the pair completed the London Marathon together, finishing in 5 hours and 28 minutes. Today, they consider themselves best friends and speak out for suicide prevention and mental health awareness. Read more.

Pope Francis’ latest philanthropic endeavor involves making a day at the beach more accessible to others. In association with charity group Walk of Love, Pope Francis has donated a year’s worth of rent at a private beach in Rome to ensure disabled youth have the opportunity to enjoy the sand and sun. Since 2012, Work of Love has rented a portion of the Little Madonna Beach and developed boardwalks, ramps, and water vehicles to provide personnel and support for the disabled. In a statement on their website, Work of Love said that it received the news of the donation with “enthusiasm and astonishment.” Read more.

Last year, Beyoncé set the pop culture landscape ablaze with her “Lemonade” album and HBO film of the same name. Now, to mark the one-year anniversary of her project, the star is looking to give back. The singer launched a new scholarship program called the Formation Scholars Awards, which aims to “encourage and support young women who are unafraid to think outside the box and are bold, creative, conscious and confident,” according to a statement on her website. Applicants can be an incoming, current, or graduate student pursuing creative arts, literature, music, or African-American studies. The program is available at Berklee College of Music, Howard University, Parsons School of Design, and Spelman College. Read more.

With a recently foreclosed farmhouse back in their possession, the Community Savings Bank in Bethel, Ohio, chose not to recoup their losses by putting it back on the market. Instead, the bank made the charitable decision of donating the property to Empower Youth, a local non-profit dedicated to giving the impoverished youth a future regardless of their socioeconomic background. “What they do and the passion they have to do it with just impressed us,” John Essen, Community Savings Bank CEO, said. The property still needs a lot maintenance, but the group is confident that the work is the perfect initiative to bring the community together. “The ranch is forming leaders with every nail driven and every piece of fence pulled,” Lori Conley, co-founder of EmpowerYouth, said. “We are building up students and tearing down boundaries around their hearts that have been there for years.” Read more.

Do Your Homework, Get a Free Haircut

Can a haircut really make a different? Barber Kodell Woods, who lives outside of Memphis, Tennessee, thinks it can. While visiting his niece at the local elementary school, Kodell noticed that many of the students needed haircuts. However, haircuts were a luxury many of the parents couldn’t afford for their kids. So Kodell decided to go to the school to give free haircuts – with one special requirement. In order to get their haircut by Kodell, the student has to have done their homework, since it’s not just about looking smart, it’s about being smart. This is more than just giving back for Kodell, who says that giving kids haircuts gives him hope through his own struggles. Read more.