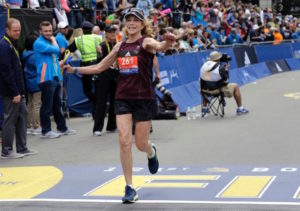 The year was 1967, and 20-year-old college student Kathrine Switzer made history as the first woman to run the Boston Marathon. Now, fifty years after the milestone, she ran the Boston Marathon again, wearing the same bib number that a man tried to rip off her clothing during the 1967 race. Since her first marathon, she went on to run 39 more, helping to pave the way for more inclusive sporting events. Switzer reflected on her legacy. “Running is a social revolution now,” she said. “Women are not just doing it to get into races or to lose a couple of pounds, they’re doing it for fun, for their self esteem. It’s transformative,” she said. Read more.

When a love of reading blooms in a person’s life, it can inspire that person to share that love. No one knows this better than 25-year-old Baghdad resident Ali al-Moussawi. As part of an initiative to promote literacy in his city, al-Moussawi drives around Baghdad in a truck that displays books for sale. Since he started the Facebook group “Iraqi Bookish” back in 2015, al-Moussawi has gone on to run a variety of literacy events throughout the city, and his mobile bookstore is his latest endeavor. “I adore reading,” al-Moussawi, who holds a bachelor’s degree in English translation, said. “I have long wanted to meet people like me, so I was thinking of creating something where all readers could gather at any time, regardless of where they are.” Read more.

Free Scoops from a Good Samaritan 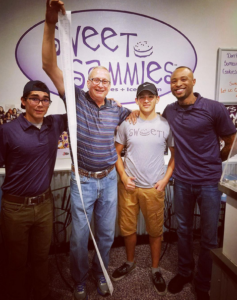 The kindness of others can come in all different forms. For patrons of Sweet Sammies, an ice cream shop in Fort Worth, Texas, it came by the scoop. A mysterious stranger known only as Mr. Gary popped into the the store to have his parking validated. After being taken aback by how kindly the staff treated him, he chose to stay at the establishment, paying for the orders of every customer for the rest of the day. By the end of the evening, Mr. Gary had spent $1,300 and found himself with a receipt that was seven feet long. Before leaving, he posed for an epic photo that can found on Sweet Sammies’ Instagram page. The shop also framed his receipt so that the night of generosity can be forever memorialized. Read more.

During his world travels as a young man, travel guru Rick Stevens learned the importance of affordable housing. After discovering how hard it was for some people to find affordable housing every night, Rick came up with an idea: instead of putting money in the bank for retirement, he would invest in cheap apartments in struggling neighborhoods. Rick recently donated a 24-unit apartment building that houses mostly single mothers and their children rent-free to the YWCA. “Rather than collecting rent, my ‘income’ would be the joy of housing otherwise desperate people,” Rick said. Read more.

A New Shoe for the Environmentally-Conscious

Reebok has just announced that a new line of shoes will be made to be completely biodegradable. Instead making sneakers from the usual rubber and synthetic material that cannot decompose in landfills, the new shoes will be made out of corn, cotton, and other organic, plant-based materials. Even the glue holding all the parts together will be biodegradable. This means that when Reebok’s shoes reach the end of their lifespan, instead of sitting in landfills, the shoes will be able to fertilize the soil. Read more.