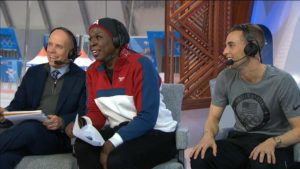 While the Olympics are always full of amazing feats, this year’s Winter Olympics featured both record-breaking performances and fun personalities on and off the ice and snow. This week, Canadian ice-dancing duo Tessa Virtue and Scott Moir won gold, earning them more Olympic medals than any other pair in history. The American Women’s Hockey Team took home the gold and bested the Canadians for the first time in 16 years. Olympic-sized personalities shone at the games, as well. After winning gold in snowboarding, Chloe Kim joined Jimmy Fallon back in the U.S. to hilariously photobomb fans. And in a match made in Olympic commentary heaven, Adam Rippon, America’s figure skating sweetheart, teamed up with SNL’s Leslie Jones for a hilarious analysis of ice dancing performances.

Anyone who’s ordered an extra-large soda or $1 sweet tea from McDonald’s is familiar with the giant foam cups the drinks come in. But they won’t be around for long — at the end of 2018, McDonald’s has vowed to discontinue using foam cups and trays, which are nearly impossible to recycle, at every location. Instead, the drinks will be served in 100% recycled fiber-based cups. McDonald’s sustainability goals will help reduce the environmental footprint that they leave and hopefully inspire other fast-food chains to do the same. Corporations stepping up to help the environment, I’m lovin’ it. Read more.

After the tragic mass shooting in a Florida high school, students have stepped up to demand a change in gun control laws and plan to take their message to Washington with the “March for Our Lives” protest in March. Plenty of celebrities have joined in the cause. One of the first star couples to pledge support was George and Amal Clooney with a donation of $500,000. Now, Oprah and Steven Spielberg have also pledged to match the generous donation of the Clooneys. Oprah tweeted: “George and Amal, I couldn’t agree with you more. I am joining forces with you and will match your $500,000 donation to ‘March For Our Lives.’ These inspiring young people remind me of the Freedom Riders of the 60s who also said we’ve had ENOUGH and our voices will be heard.” Read more.

Always trust a dog’s intuition, especially Cora the Corgi. She can tell better than most when you’re in need of a little extra love. Cora, a trained therapy dog, recently comforted a stranger in the airport who was sitting alone and had just lost his own dog. This isn’t the first time that Cora has put her skills to use. Madison, Cora’s owner, says she can just tell when someone needs comfort, and she’s more than  happy to provide it. Read more.

When most 5-year-olds are playing with dolls, Zoe Terry was starting a nonprofit to bring dolls of color to girls of color who could not afford them. Zoe, now 11, said she started the charity “Zoe’s Dolls” because she wanted to “let little brown girls know that their image is beautiful.” At the time she founded her charity, Zoe was bullied because her skin was darker, and her hair was puffy. Zoe decided she didn’t want any other girls to feel the way she did when she was bullied and thought dolls would be the best way to let other little girls like her know that they are beautiful. Now, six years after its inception, Zoe’s Dolls has donated 20,000 dolls to girls in need. Read more.