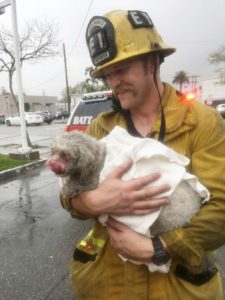 “Failure was not an option,” said Firefighter Andrew Klein, as he recalled rescuing a small dog named Nalu from a California fire. After he found the the pup laying unconscious in the burning apartment, he and another firefighter used oxygen, CPR, and mouth-to-snout (the dog equivalent of mouth-to-mouth) resuscitation to bring the dog back from what Klein described as a “lifeless” state. Nalu’s owner, Crystal Lamirande, said she assumed he was dead, but the firefighters were able to revive the dog after 20 minutes. After 24 hours, Nalu was almost back to full health with some coughing, but is otherwise in good spirits. Read more.

At only 11 years old, British fifth grader Matthew Smith has become the world’s youngest orchestra conductor. This past Sunday, Matthew conducted the 75 members of the Nottingham Symphony Orchestra as part of a charity event. His enthusiastic leadership helped the group captivate an audience of 1,300 people, including his proud mother. The opportunity proved no challenge for the young musical prodigy who, at only 7 years old, was discovered by NSO conductor Derek Williams. Matthew, who also plays five instruments, is surprised by his newfound fame. “I’m now asked for my autograph as I walk to school,” he says. Read more.

Massachusetts police sergeant Steve Dearth was on his dinner break at Panera Bread when he noticed 3-year-old Lillian and her father come into the restaurant. Lillian’s dad brought her over to officer Steve, and the little girl told him all about her dream of becoming a police officer. Before parting ways, Lillian asked the officer if they could have a play date, and a few weeks later, Lillian and her mom went to the police station for the get-together. Lillian brought Steve treats to share with his friends, and Steve gave them both a tour of the station. “She’s very sociable and very outgoing. I’ve been here for 24 years and never seen a child that friendly,” the officer said. Read more.

Teen Gets Into All 8 Ivy League Schools

Choosing where to go to college is a difficult decision for all high school seniors, but for Ifeoma White-Thorpe, a senior from New Jersey, it will be a particularly tough choice. Ifeoma was accepted into all eight Ivy League schools, plus Stanford. Ifeoma knows that she wants to study global health and biology, but now the big question is which of the reputable schools she will attend. Read more.

It’s never too late to return an overdue library book. “Bid Time Return” by Richard Matheson was stolen from Great Falls Public Library in Montana and was recently mailed back after 35 years. Kathy Mora, the library director who received the package, says  the stolen book came with $200 and an apology note. Kathy was also surprised to see that the book had been restored and signed by the author. “This is not my book, it belongs back in the Great Falls Public Library – wrongfully taken, yes, but if you can, kindly take into consideration it has been loved and cared for all these years and know I am sorry for taking it,” the anonymous sender wrote. Read more.