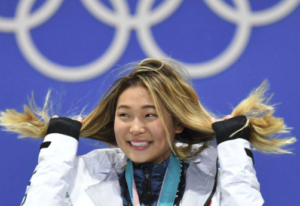 Chloe Kim, the 17-year-old Team USA snowboarder, has taken the world by storm. Kim has been snowboarding since she was 4 years old, with immense support from her parents. Growing up, her family’s Korean roots were always just as important as her American ones, meaning  Kim can speak fluent Korean and is excited to be participating in the Olympics in South Korea so she can see her family and the places where her parents grew up. Kim said she felt as though she was representing both the USA and Korea since she has such strong ties to both places. And represent them she did, winning the gold medal in snowboarding by achieving a record-breaking, almost perfect score of 98.25. Read more.

“Black Panther” is one of the year’s most anticipated movies, so anticipated that even Lupita Nyong’o, who stars in the movie, was unable to get opening night tickets. So students from a school in Atlanta are dancing for joy after finding out they have tickets to see the movie. Last Friday, Wade King, director of curriculum and development at Ron Clark Academy, surprised students with tickets. At the school, they are incorporating the “Black Panther” comic books and movie into the curriculum to learn about African history and Imperial history. Now, a video of the students adorably dancing at the news of seeing the movie has gone viral. Read more.

Binging TV all night, only to oversleep, sounds like any normal teenage. But Red Gerard isn’t quite a normal teen: He’s an Olympic athlete. And Gerard proved that you apparently can be both a normal teenager and an Olympic gold medalist, because the morning he won his gold medal in snowboarding for Team USA, he slept through his alarm after marathoning “Brooklyn Nine-Nine” the night before. He still managed to make Olympic history as the youngest athlete in 90 years to win a gold medal. Read more.

120 Volunteers Show up for Chicago’s Elderly 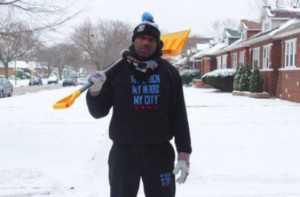 Winter means snow, and snow means shoveling. Not something that most people like to do, but that didn’t stop 120 volunteers in Chicago from showing up to help their elderly neighbors. Jahmal Cole tweeted asking for 10 volunteers to meet him and help shovel driveways for the elderly, and he promised sweatshirts from his nonprofit community group “My Block, My Hood, My City” as well as lunch for anyone who came out. Imagine his surprise when 10 times as many people as expected showed up. Many who couldn’t make it out donated money to the organization and offered to buy the volunteers lunch. One man even donated his Chicago Bulls tickets. Read more.

Sisters Compete Against Each Other in Olympics

In 1993, Minnesota couple Greg and Robin Brandt adopted a 4-month-old baby girl from Korea who they named Marissa. Within a year, the Brandts also welcomed a biological daughter they named Hannah. They put both girls in hockey, never imagining the two girls would both make Olympic teams, for two different countries. Marissa will be competing for Korea while Hannah will be competing on Team USA. Their parents are ecstatic to be able to not only cheer on both daughters but also visit the country of Marissa’s birth. While supportive of each other, both sisters say that if it comes down to USA vs Korea, neither will take it easy on the other. Read more.