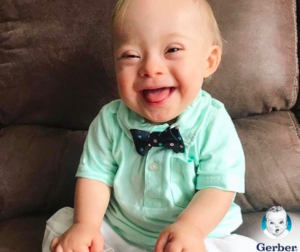 Still in diapers and already modeling, 18-month-old Lucas Warren is the new Gerber spokesbaby. This year, Gerber went to Dalton, Georgia, to find the new face of their company. And it’s the first time Gerber has chosen a baby with Down syndrome for the role. For Gerber it was Lucas’ winning smile that sealed the deal. Lucas is also a reminder that every baby is a Gerber baby, including children with Down syndrome. Get ready to see his adorable smile everywhere! Read more.

It’s been four months since Hurricane Maria hit Puerto Rico, but after all this time, there are still people who don’t have power. San Jaun teen Salvador Gomez Colon decided to do something about it. Gomez Colon jumped into action just days after the hurricane hit, starting a GoFundMe campaign to buy solar lamps. The response was overwhelming, but there were still more people who needed help. Gomez Colon started project C+Feel = Hope to raise money and partner with nonprofit organizations to distribute solar lamps and hand-operated washing machines to rural areas of Puerto Rico. Salvador Gomez Colon’s commitment to helping this neighbors is a bright light in the long, post-Maria recovery efforts. Read more.

On McGennan Beach in Warrnambool, Australia, a retirement community has traded in shuffleboards for boogie boards. Everyday, a group of about 18 retirees goes out to catch waves and hang 10 on their boogie boards as a form of exercise. Most of the regular group never did anything like boogie boarding before retirement. In fact, some of the members couldn’t even swim before they took up boogie boarding. The seniors loyally come out everyday because the exercise is as good for their bodies as well as their souls. Next time you’re at McGennan Beach watch out for the Silver Surfers. Read more. 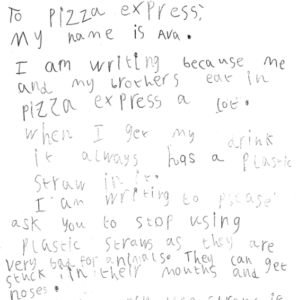 Five-year-old Ava proves that you’re never too young to fight for the environment. The young girl wrote to Pizza Express, an Italian food chain with 470 restaurants all over the country, to express her desire that they stop using plastic straws as they are bad for animals. Ava said: “I am writing to you to ask if you could stop using plastic straws because they are very bad for animals. They can get stuck in their mouths and noses.” The chain responded and announced their decision to now only use biodegradable paper straws in all of their restaurants nationwide. Way to go, Ava! Read more.

Other than in “Cool Runnings” Seun Adigun, one of the members of this year’s Olympic women’s bobsled team from Nigeria, hadn’t heard of the sport before the 2014 games. Now, Adigun and teammates Ngozi Onwumere and Akuoma Omeoga, all former track and field athletes will compete in the Winter Olympics in Seoul, South Korea. Much like the 1988 Jamaican men’s team, these women are making history as the first African bobsledding team to ever compete in the Olympics. While the women are smaller than typical competitors for bobsledding, their speed and determination more than make up for it. Tune in February 21 to watch these women compete. Read more.