Man Gives Boots off His Feet to Homeless Man on Subway 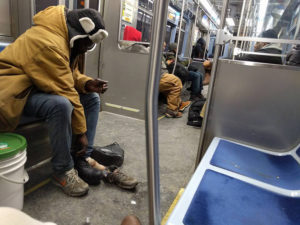 A woman sitting on a train, riding through Chicago witnessed a truly incredible random act of kindness. Jessica Bell posted on Facebook about the interaction she saw between a homeless man and younger man carrying a backpack and suitcase. The homeless man wore tattered shoes, his feet bleeding because of exposure to the elements. In a moment, the young man bent down, untied what Jessica describes as extremely nice, almost new winter boots and handed them to the homeless man with a pair of socks from his suitcase. The young man put on a spare pair of shoes that Jessica noted weren’t nearly as nice as the winter boots he selflessly gave away.

One Man’s Trash Is Another Man’s Library

After sanitation workers in Ankara, Turkey, noticed a plethora of discarded books on their routes, they decided to start collecting them. Initially, the collection was used by the employees and their families, but as interest from the community and the number of books began to grow, they started discussing a more permanent solution –  a library. Today, that library stands in what was once a vacant brick factory at the sanitation department, and houses more than 6,000 books. The library has been a huge success so far, with the the city even hiring a full-time librarian to manage it. Read more.

Millie Wall has been a Vikings fan since their inception in 1961, and this past Sunday’s shocking victory was her first time ever attending a playoff game. This was the team’s first playoff game at home since 2009, and they made sure to have superfan Millie there. Now, thanks to NFL commissioner Roger Goodell, she will be attending the Super Bowl. The free tickets are an early 100th birthday present from the NFL, and conveniently, the Super Bowl will be held at the home of Millie’s Vikings . There’s an online movement to help Millie get to Philadelphia this weekend to see her beloved Vikings take on the Eagles. Maybe she will bring them a little luck! Read more.

Mirror Mirror on the Dolphin’s Wall 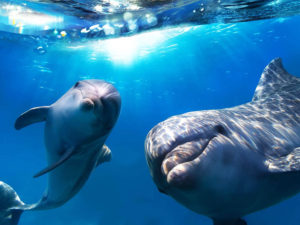 Being able to recognize oneself in the mirror is a rare ability among animals, with only humans, chimpanzees, elephants, magpies, and dolphins able to do it. Some scientists believe self-recognition is a sign of higher intelligence. Psychologist Diana Reiss and then-graduate research assistant, now professor, Rachel Morrison launched a scientific study to determine the age of self-recognition in dolphins. While humans are able to recognize themselves starting around 12 months, Reiss and Morrison discovered that dolphins can identify their reflection at seven months. A female dolphin in the study named Bayley displayed behavior such as twirling and striking unusual poses in the mirror at seven months. The male dolphin, Foster, liked to blow bubbles at himself and turn upside down. Though not scientifically significant, it was noted that Foster liked to visit the mirror more than Bayley. Read more.

Love Is in the Air (Literally)

As Pope Francis took a flight from Santiago to Iquique, Chile, he decided to make a little bit of history. As the plane was in the air, the pope married two flight attendants, which was a papal first. While the two attendants, Paul Podesta and Carlos Ciuffardi, were already married in a civil ceremony, they had not yet been married in the Church because their parish in Santiago was destroyed in an earthquake in 2010. Upon hearing their story, Pope Francis decided to celebrate their marriage ceremony. He gave the couple two rosaries and drafted a marriage certificate to make it official. The cardinals on board also got involved, with one of them signing as a witness to the marriage. Read more.