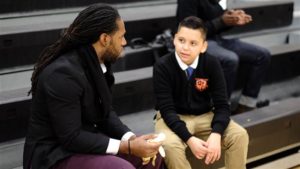 Tracie Washington, principal of Dr. Billy Earl Dade Middle School in Dallas, Texas, was concerned when many kids opted out of the annual “Breakfast with Dads” event. The event was put in place to help fathers engage with the students, as about 77% of the pupils have been classified “at risk.” This year, kids weren’t signing up for the breakfast, and Washington speculated many children didn’t have a father or father figure to ask. Parents in the community posted on Facebook asking for volunteer “dads,” and while the initial goal was to recruit 50 men, over 600 men showed up. The kids were overjoyed at the support, with one saying “I didn’t even know that I was going to be able to do the breakfast, and I am leaving with a mentor!” Read more.

In Oregon, there’s a new governor in town, and he’s probably not what you’re expecting. Dom Peters, 11 years old, was elected the first “kid governor” this past Monday, based on votes from fifth-graders across the state. Although the role doesn’t actually hold any power, the state gave him a full-on ceremony with an invocation, national anthem, and a presentation of colors by a Boy Scouts troop. What does Peters hope to do with his year in office? “I really hope I can make a difference in Oregon to stop bullying,” he said. Read more.

A sad image of Syrian refugee Mohammed Khaled turned into a happen ending in Adiyaman, Turkey. The 12-year-old was pictured gazing longingly into a gym, a footstool strapped to his back (from his job as a shoe-shiner). When the photo was put up on social media, it went viral, prompting the gym owner Engin Dogan to help out. He tracked down Khaled and offered him a lifetime membership to his gym. “I had always dreamed of losing weight and now I believe I can do that by working out,” Khaled says. Read more. 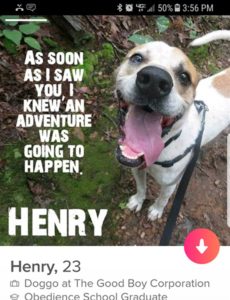 A shelter pup is doing what humans do when they’re looking for love: creating a Tinder profile. Miranda Morrison, the canine behavior and enrichment coordinator at Animal Ark Rescue in Columbus, Georgia, is hoping to find Henry, a dog who has been at the rescue for nearly three years, a forever home in an unconventional way. In searching for his future owner, she decided to put him on Tinder. His profile is filled with great information (his perfect first date would including going “home to a cozy couch for a little living room fetch with a squeaky plush toy, followed by a Netflix marathon and snuggle fest before dozing off into a cozy slumber”), and he has great one-liners “Netflix and Nuzzles?” Henry’s had 21 matches so far! Read more.

You should feel good about shopping at Trader Joe’s, and not just because of the reasonably priced quality organic food. Trader Joe’s has a policy to donate all of their perishables (that other stores might throw in the garbage) to charity. This policy had a big impact this week thanks to one store location in Kalamazoo, Michigan that had a problem with the cooling system. The Trader Joe’s donated 35,000 pounds of food to Kalamazoo Gospel Mission, a local shelter. It was the largest single donation they’ve ever received. Greg Weaver, Director of Food Service at the mission, was thrilled, saying “They just really exemplified a culture of generosity and we’re just so thankful for them.” Read more.