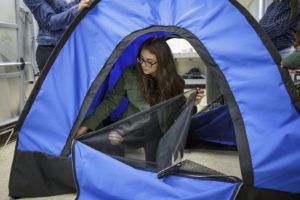 Twelve teen girls from San Fernando High School wanted to help the homeless population of their city, but, coming from low-income families themselves, couldn’t offer money. So instead, they started an engineering project, designing a rollaway backpack that folds out into a solar-powered tent. None of the girls had experience in engineering or design, but the group invested some time in YouTube and Google and taught themselves how to get it done. Their little idea is making an impact in a big way, winning a $10,000 grant from the Lemelson-MIT Program to help further develop their invention. Read more.

Buffalo Bills fans are showing their appreciation to Andy Dalton, quarterback for the Cincinnati Bengals. While at first glance that sentence may seem confusing, it actually makes perfect sense: Dalton threw the game-winning pass against the Baltimore Ravens, a loss that meant  the Bills would advance to the NFL playoffs. To thank Dalton, Bills fans began donating to his foundation that supports kids with serious illnesses and special needs. The fans have now raised close to $250,000! Read more.

Christopher Tate was making the rounds as Santa in nursing homes in Washington D.C. Christmas Eve when he ran into a woman who questioned his credibility. Upon receiving a wrapped present from Tate, a nursing home resident asked him how he knew what she wanted. When Tate asked, “’Well, what do you want?” she replied that she just wanted to dance. So, the staff turned on some music and recorded a video of the two in a delightful Christmas dance off. Fortunately, this woman was right under the Christmas cutoff age of 92, at 90 years young. Read more. 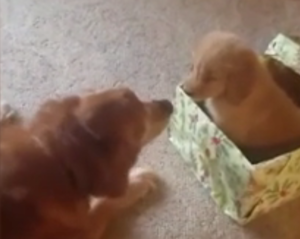 It’s not just kids who want a new puppy for Christmas. Cash, a 12-year-old Golden Retriever was ecstatic to unwrap his present this year: a new puppy of the same breed. The owners filmed Cash’s reaction in a delightful video in which Cash bounces around their living room in excitement. Cash’s owner Marie noted the two are now instant “best buds,” but that the initial reaction surprised even her, saying, “‘I knew he would be good [with another dog], but I never expected the reaction of pure joy – I had tears watching him.” Read more.

sually, mistakes are a bad thing. But Oksana Zaharov receiving the wrong lottery ticket from the clerk might just be the best mistake ever made. Instead of a $1 scratch ticket, she bought the $10 “Set for Life” ticket, not even bothering to scratch it for a few weeks. When she eventually did, she thought the ticket was fake, as the prize was too good: A guaranteed $5 million over the next 20 years, and, after that, $172,068 annually for the rest of her life. Zarahov plans to use the money for a nice vacation and to ensure her children can get through college debt-free. Read more.