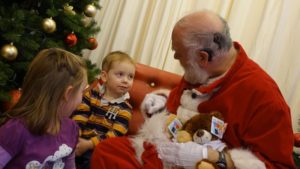 Michel David was only 15 years old when he started losing his hearing, so he knows firsthand how isolating being deaf can be. That’s why he plays Santa for an event organized by Quota Club of Ottawa and Ontario Hands & Voices, a nonprofit that supports families with children who are deaf or partly deaf. Not only does this allow kids to meet a Santa who can actually communicate with them through sign language, but also they can see that Santa is wearing hearing aids — just like them! Read more.

Montreal restaurant owner Raji Abi Rached is dedicated to making sure the holidays are a happy time for everyone. His restaurant is near an area where homeless people often hang around, and he has become accustomed to waving them over for a free meal. This Christmas, he’s taking it one step further and has been spreading the word online that he is offering free meals to the homeless. He doesn’t want to be alone in this venture, explaining that he tweeted about it because “I wanted to influence people to do the same. I wanted this to be contagious.” Read more.

After reading a book on Jane Addams, the founder of Hull House, a homeless shelter, Porter Haupt of Saratoga Springs, age 5, was inspired. “I want to help all the homeless people in the world. I know I can,” she told the local newspaper. Haupt enlisted the help of her mother, her school friends, a Facebook page, and hosted a donation-based ornament-making party to start an initiative for the homeless: “Whole House.” Haupt, her mother, and members of Code Blue were able to donate $1,200 worth of coats, clothing, and other necessities to a local homeless shelter, and the initiative just keeps growing. Read more.

Young Syrian Refugees Will Have Their Own Version of Sesame Street

The John D. and Catherine T. MacArthur Foundation have awarded a $100 million grant to The Sesame Workshop and International Rescue Committee for what Jeffrey Dunn, head of Sesame Workshop, says might be their “most important initiative ever.” The grant will be used to help relieve the “toxic stress” on Syrian child refugees by creating a special version of the show for them that will be available on smartphones. They will also create child development centers where  parents can bring their children to take advantage of free advice and resources. President of the International Rescue Committee David Miliband believes this initiative will “”bring hope and opportunity to a generation of refugee children.” Read more.

An anonymous donor hoping to help at-risk youth is making a strong case for the Light Side of The Force. One-hundred forty children from Kids Up Front and Cornerstone Youth Center in Calgary, Canada, were treated to a free showing of “Star Wars: The Last Jedi” thanks to the donor renting out an entire movie theater for them last Sunday. The kids were bussed in and enjoyed a pizza party after the show. One young man noted he doesn’t typically get to go to the movies, and said he was “grateful” for the “fun experience.” May the force be with all those young Jedi! Read more.