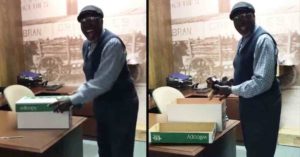 Floyd Green recently suffered the loss of his beloved Yorkshire terrier. After 30 years of service as a custodian in a Howard County, Texas, bank, his co-workers decided they needed to do something particularly special for Green. Each of his colleagues chipped in to surprise Green with a brand new Yorkie puppy, complete with a bright gift ribbon on its collar. Green’s reaction is the most beautiful thing you’ll see all week. Read more.

Above and Beyond, “Have it Your Way.”

While driving down the road earlier this week, Rebecca Boening, who is diabetic, realized her blood sugar was getting dangerously low and quickly pulled into the nearest Burger King. As she attempted to order and explain the situation, employee Tina Hardy, whose own husband is diabetic, quickly realized something was wrong. As Boening pulled around to pay for her meal, she caught sight of Hardy running to her car with ice cream to help bring up Boening’s blood sugar levels. After receiving her food, Boening was promptly instructed by Hardy to park where Hardy could keep an eye on her. “Hopefully Tina Hardy will receive the recognition that she truly deserves,” Boening said. Read more.

The Christmas stockings hanging at the Olds residence in Marianna, Florida, have multiplied this year. Sofia and Dashoan Olds read a Facebook news story earlier this year about seven siblings, all up for adoption, living in three different foster homes. The couple, previously childless, decided they would adopt the children. “All or none,” Mrs. Olds said. Though there’s certainly been a shift in all their lives, each member of the family is settling into a joyful rhythm of life together. Now coming up toward their first Christmas as a family, the whole bunch is ecstatic. The eldest daughter Necia noted, “It’s like a dream come true.” Read more. 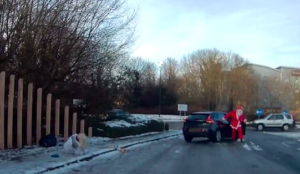 As Britain receives record low temperatures and snowfall, the walkways, as expected, have become icy and treacherous. Dave Cordoza, a local motorist in Watford, Hertfordshire, England, caught some particularly warm-hearted escapades in the wake of the frigid weather. After a woman on the roadside slipped and fell flat on her back, the car ahead of him came to a sharp stop. Out of the car walked a man dressed as Santa Claus who rushed to lift the woman to her feet, help her gather her bags, and even put her hat back on her head before returning to his vehicle and driving off. Good Samaritan Santa for the win! Read more.

Sara Goldrick-Rab is a professor of education policy at Temple University. She has done extensive research on the plight of low-income college students. Noticing that students often have financial emergencies that are not covered by normal financial aid procedures–such as a car repair or a medical emergency–Goldrick-Rab decided to start her own fund to help low-income students. When she won the Grawemeyer Award for her research, accompanied by a $100K prize, she began a campaign to 3-1 match all donations into her fund with the prize money–and she’s still going. Read more.