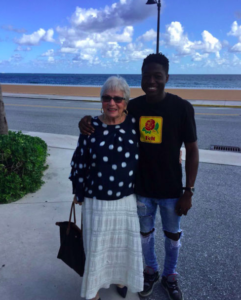 Last summer, 22-year-old Spencer, an aspiring rapper living in Harlem, was randomly matched to play Words with Friends with 81-year-old Roz, a retiree living in Florida. After 300 (and counting) Words with Friends games, and use of the app’s message function, the two became fast friends. This past Saturday, Spencer flew down to Florida to finally meet his long-time rival. The result: the most adorable pictures you’ll see all year. Read more.

Daniel Helsel, 42, was born in 1975 in the back of an ambulance. He grew up, became an EMT, and had never worked on his birthday before, until Monday. In the early hours of the morning, Helsel and his colleague were called to pick up a woman in labor and take her to the hospital, at which point Helsel ended up delivering the baby girl in the back of the ambulance. A spokesperson for the hospital called it “a remarkable and amazing coincidence.” Read more.

Magic in the Mail: Couple Pens Replies to Letters to Santa

Gregg and Shawna Calvert caught sight of a mailbox for sale last year: a festive, red, old-fashioned receptacle adorned with the words “Letters to Santa.” Mr. Calvert took the idea and ran with it, opting to build his own Letters to Santa mailbox for children in the neighborhood to leave their list. The couple, as well as their teenage children have been writing replies “from Santa” to all the children who write, and the family’s begun receiving mail from across the nation. “It’s been such a delight,” Mrs. Calvert said. Read more. 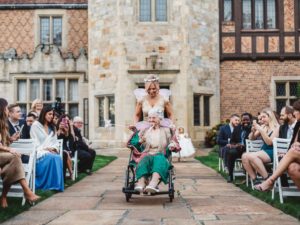 When one hears “flower girl,” children usually come to mind, however, Keely Crimando wanted her grandmother, 86-year-old Dorothy Czartorski, to be part of her big day in a special way. “My grandma means the world to me,” she said. “She was the first one I called when I knew Michael was the one.” Crimando asked her grandma to serve as the main flower girl, bedecked in a crown, wings, and a fairy wand. The magical moment was captured in photos and on-camera, and from the perspective of Czartorski, “I had such a beautiful time. I just loved every minute of it.” Read more.

For the 20th year, Candy Cane Corner in Salt Lake City, Utah, will open its doors to families in need. The initiative collects donations of Christmas gifts and clothing to be selected by local homeless and needy families. All the items are wrapped and given away, free-of-charge. According to one volunteer, “Being able to provide Christmas for someone who otherwise might not be able to have Christmas is just a great feeling.” Read more.