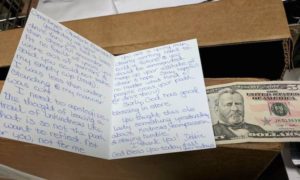 While 20-year-old Andrew Richardson was working his shift at a California Starbucks, a friendly interaction at the drive-thru window turned south when the driver asked Andrew to throw away the trash in her car, which he politely informed her he could not do, due to a California health law. The driver became frustrated and drove off, and Andrew soon forgot the incident. During Andrew’s shift the next day, he received a surprise visitor – the woman came back through the drive-thru with a note apologizing for her attitude and a $50 tip for Andrew, who said it was an interaction he’ll never forget. Read more.

Runners Look out for Each Other

Good sportsmanship is key in all competition, and at the fourth annual Philadelphia Love Half Marathon, a spirit of teamwork was alive and well. As a visibly fatigued woman buckled over and became disoriented while approaching the end of the race, two runners beside her picked her up by her arms and carried her all the way to the finish line. In a moving act caught on camera, this group of individuals demonstrated what happens when you combine endurance, willpower, and compassion. Read more.

Charter school teacher Lovely Hoffman noticed that the girls in her majority black seventh grade class struggled with their self-esteem when it came to their looks, and how they compared with what was deemed “beautiful” by society. So, she penned and performed an original song called “My Black is Beautiful,” an uplifting piece that celebrates the diversity of black beauty among her students. Hoffman even got her students to participate in the making of the music video. “Because what happens when you have someone who is really, really smart but has no sense of who they are or no confidence in themselves?” asked Hoffman, who funded the video. “You need to make sure children feel good about themselves, and feel confident about themselves.” Read more.

Doctor Makes House Calls to Those without Access to Care

With health care a hot topic for debate in the country right now, those without access to resources often go overlooked. No one knows this better than Boston doctor Jim O’Connell. Dr. O’Connell is the head of Boston Health Care for the Homeless, a program that focuses on delivering much-needed care to the city’s homeless residents. Since starting with the program over 32 years ago, Dr. O’Connell and his team have treated more than 700 regular patients, and they spend their days walking the streets looking for people in need of care. “This man is unbelievable!” One of his patients said. “This is my doctor. He’s been my doctor for life.” Read more.

Orphan Baby Rhinos Heal with the Help of Hand-Knit Blankets

With rhino poaching on the rise, many baby rhinos are left without their parents to help them survive. At the Rhino Revolution sanctuary in South Africa, these baby rhinos are taken in and given an unexpected gift: a hand-knit blanket. The young rhinos take comfort in the warmth of the blankets knitted by volunteers at Blankets for Baby Rhinos. Orphanage veteran Natalie Rogers pointed out the compassion of those volunteering their time to knit something warm for the animals. “The love and attention that has gone into each and every blanket we have received is clear to see,” she said. Read more.