Not Your Typical “Hen Party.” 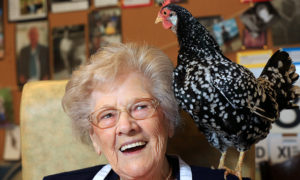 Sheffield University in the United Kingdom hosted a “Hen Party” earlier this week for the elderly and those with dementia. The university brought chickens to the party with whom the elderly could play and interact as a form of therapy for loneliness and stimulation for creativity. The party– part of the university’s Festival of Social Sciences– was sponsored by HenPower, a program in which older people practice hen-keeping for “the benefit of the hen and the hensioner.” Read more.

Six years ago, Chris Williams started volunteering to fix cars for women in need. Now, “God’s Garage” is a full-fledged nonprofit filled with volunteer mechanics. The operation fixes as well as gives away donated cars to single moms, widows, and deployed soldiers’ wives– for free. According to one single mother, who needed a car to take her daughter for cancer treatments: “It saved her life and mine. It really has.” Read more.

Mattress Mack Is Back!

Houston furniture store owner Jim McIngvale (“Mattress Mack”) has been at the forefront of Hurricane Harvey relief since the beginning, initially offering shelter to victims in his stores and showrooms during and after the storm. Then, he sent Harvey first-responders, military veterans, and die-hard Astros fans to see game six of the World Series. Now, he and his daughter, Dr. Liz McIngvale, are giving out grants to aid those still recovering mentally and emotionally from Hurricane Harvey. In addition, McIngvale and his family are hosting a Thanksgiving feast for the local community. Mattress Mack just keeps on giving back! Read more. 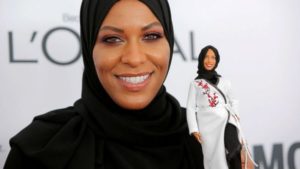 Ibtihaj Muhammad earned an Olympic bronze medal for the U.S. in fencing in 2016, all while wearing the hijab. In honor of the record-breaking Olympian, Mattel has produced a history-maker of its own: the first hijabed Barbie doll, complete with Muhammad’s fencing gear. “She is a Barbie who is strong enough to wield a giant saber and dedicated enough to spend years working her way to an Olympic medal,” Muhammad said. “I hope that little girls of color…across the heartland will be inspired to embrace what makes them unique.” Read more.

Aloma Elementary School in Orange County, Florida, has devised a new system to not only decrease their food waste dramatically, but also give back to the community. The school’s implemented a “share table” in their lunchroom where kids can leave packaged food that has come with their lunch that they don’t want to eat and pick up items that they do. The leftovers are sent home with children in low-income households or donated to local food pantries. Lora Gilbert, senior director of food services at the Orange School District noted of the program, “We don’t want to see any child go hungry.” Read more.