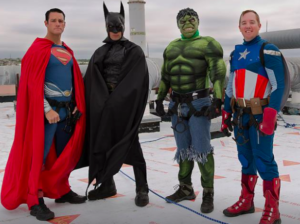 Every year, North Central Baptist Hospital in San Antonio, Texas, organizes a “Superhero Drop.” The annual event features police officers who don superhero costumes and rappel down the hospital walls, surprising (and delighting) young patients. The drop is held each year in honor of Julian Andrade, son of a San Antonio police officer and a former pediatric patient at the hospital. This year, Superman, Batman, the Hulk, and Captain America made patients’ day. Read more.

Shawn Ortolano of Staten Island started his charity, Spokes of Hope, a year ago, and in that time has given away more than 125 bikes to children who might not be able to buy one otherwise. Ortano uses his spare time (and connections) to find everything from new to dumpster-salvaged bikes and bike-parts. Then, he refurbishes them to brand-new condition and gives them to children in his neighborhood. His wife Nicole noted: “He loves to be generous with people and give back to the community in any way, shape, or form.” Read more.

On the Trail with Dale

Eight-two-year-old Dale Sanders just became the oldest man ever to hike the Appalachian Trail in less than a year. Sanders spent the last seven months hiking the entirety of the trail, beginning in Georgia in January and finishing his trek in Maine. “I keep thinking, is someone going to come out of the woodwork and say, ‘Uh-uh, I hiked it last year … and I was 83’ — but no one has stepped up and said that,” Sanders s=aid. This isn’t his first athletic achievement. Sanders has spent time as a circus acrobat and lifeguard, broke the record for underwater breath-holding in 1959, and was crowned the IUSA’s Spearfishing Athlete of the Year in 1965. With a list like that already under his belt, we have to wonder, what’s next? Read more. 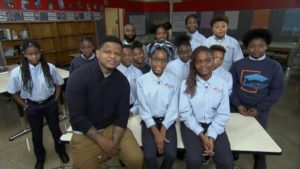 Terrance Sims recently began teaching sixth-grade math at Milwaukee Excellence School. “When I got there, I wanted the kids to know right away that this was my approach to teaching, so I wrote an introductory rap at the start of the school year to get them hooked in. The ball got rolling, and they started adding lyrics.” The students collaborated on a song and performed it, posting the video to YouTube and Instagram. Their song and the message of “Excellence First” has gone viral and reached thousands, including Jada Pinkett Smith and Michelle Obama, who noted she “couldn’t be prouder.” Read more.

Jim McIngvale, known locally around Houston as “Mattress Mack,” continues to give back to his community after Hurricane Harvey. This week, he sent a group of 40 people, comprised of Harvey first-responders, military veterans, and passionate Astros fans, to see their hometown team play in Game Six of the World Series. After the hurricane, McIngvale opened his furniture showrooms as shelters for hurricane victims and used his company’s truck to help rescue people stranded in their homes. McIngvale humbly acknowledged his gift to see the now World Series Champion Astros play saying, “The first responders are the true heroes of Hurricane Harvey, and what better people to send?” Read more.