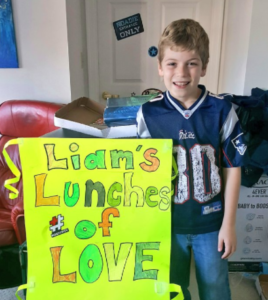 10-year-old Liam Hannon of Cambridge, Massachusetts, has taken the problem of homelessness to heart. After a summer reading assignment inspired him to look through an educational website on the issue, Liam began taking time each week to make brown-bag lunches for his homeless neighbors. Soon, he enlisted his friends’ help. Every week, they make upwards of 56 lunches and distribute them among the homeless population in his area. Liam says that “Whenever I see them [the homeless], they seem like they’re sort of sad or depressed, but when we go over to them, they sort of light up and become more open.” Read more.

Christopher Hopkins, NPR swing editor, accidentally posted a personal update about his daughter on NPR’s Facebook page. Although he quickly realized what he had done and edited the post, little 1-year-old Ramona, who evidently adores cats more than anything else on this earth, had already captured the hearts of more than a few fans. In light of recent tragedies, Ramona’s “shrieking, spasmodic joy” over a couple of felines was, for many an NPR follower, just what the doctor ordered. Read more.

Denzel Washington got a little lost on the way to a restaurant in Chicago last weekend. When the Academy Award-winning actor decided to stop and ask for directions, he happened to meet one of his biggest fans. Eighty-six-year-old Juanita Hubbard greeted the actor with shock and joy; “I’m not going to let you go!” she exclaimed. The video of their encounter has since gone viral. Hubbard noted of the experience: “It was just like talking to one of my own sons.” Read more.

Home Is Where the Art Is 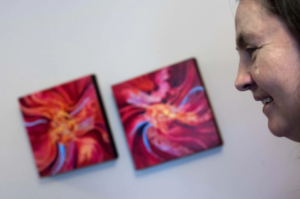 Allison Stocks, 15, from Arlington, Virginia, was struck by a photo accompanying an article on housing for the homeless. The stark, barren walls of the family’s apartment moved her to want to help the  new housing for the previously homeless feel like home. Allison started her own organization, Home Is Where the Art Is, collecting donations of artwork for  people transitioning from homelessness or shelter living to a new home. “Although there weren’t a lot of things I was capable of doing,” she notes, “I could help make their apartments more inviting.” Allison has touched more than 50 people in her nonprofit’s first year alone. One art recipient expressed: “It’s a little taste of what the future will look like, when I have a real home.” Read more.

Las Vegas blood centers were overwhelmed earlier this week after news broke about the mass shooting at an outdoor country music concert Sunday night. Individuals showed up as early as 3:48 a.m. Monday morning to donate blood and show their support for the victims. They formed lines that wrapped around the building and down the block and waited  up to three hours. United Blood Services eventually had to close off donations for the day due to the influx of donors but has since resumed taking donations. The donors’ acts of caring prove how people can come together to help others in the face of tragedy. Read more.