Celebrities are stepping up in the wake of Hurricane Maria to bring desperately needed aid to Puerto Rico. Jennifer Lopez has been raising awareness on Univision and Telemundo, and she is leading by example, pledging $1 million to help the island, which was then matched by “Despacito” singer Daddy Yankee. Dallas Mavericks owner Mark Cuban helped out Mavericks guard J.J. Barea, lending the team’s private jet so Barea, who has family on the island, could fly out supplies. Mr. Worldwide himself, Pitbull, sent his own private jet out to help transfer cancer patients to the U.S. so they can continue their treatment. Major acts of kindness and extreme boons to the relief effort have also been carried out by A-Rod, Ricky Martin, and Gina Rodriguez, just to name a few. When asked about his role in the relief effort, Pitbull replied, “Thank God we’re blessed to help. Just doing my part.” Read more.

This Could Bee a Big Step

Cedar Rapids, a small city in Iowa, wants to help the bees. Partnering with the Monarch Research Project, which is dedicated to saving monarch butterflies, the city intends to convert 1,000 acres of land into a pollinator habitat. The team will utilize unused land, planting wildflowers and prairie grass to attract bees and prevent invasive weeds from taking over. This project will give the declining bee population back their habitat that had been destroyed after years of increased human development. Read more. 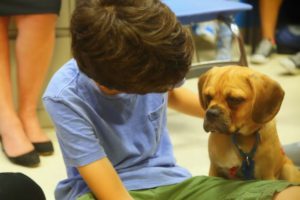 When you’re feeling stressed, upset, or angry, what could be better than receiving unconditional love and support? The New York City Department of Education answered that question for its students by starting a new program that employs “comfort dogs” to ease schoolhouse angst. Essentially, schools adopt rescue animals to facilitate happiness among staff and students. The dogs have been proven to help children socially and emotionally, calming them down in moments of distress. A simple pet or wag of the tail has already caused positive results in city schools. Read more.

All Dressed Up for Picture Day

Seniors at North Farmington High in Detroit, Michigan, have started a tradition that puts Senior Skip Day to shame. After a few students decided to dress in costume for their senior ID photos, the trend quickly caught on, and then went viral. Soon-to-be graduates hilariously dressed as everyone from Audrey Hepburn to Woody from “Toy Story” will make you wish the DMV was as generous with its photo regulations. Read more.