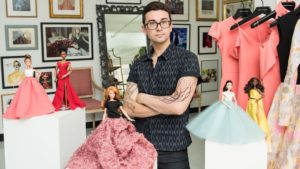 Since Barbie’s inception, the toy has served as a hallmark of cultural conceptions of beauty. Now partnering with Mattel to create a new line of Barbie dolls, 2007 Project Runway winner Christian Siriano is using his design expertise to display his signature styles, as well as showcase a racially and physically diverse group of women. These dolls are in fact based on celebrities that Siriano has dressed himself, including actress Leslie Jones at the “Ghostbusters” premiere and Solange Knowles at Art Basel. Siriano is thrilled about the collaboration, calling it a “dream come true.” Read more.

The Kindness of a Stranger

When Tyler Opdyke, 18, found a wallet at the end of a driveway, full to the brim with more than $1,500 of cash plus credit cards, he didn’t hesitate to knock on the door to the house to return it. Finding no response, he left the wallet on the front stoop. It wasn’t until later, when the house’s security cameras were examined, that the wallet’s owner realized that a stranger and Good Samaritan had been knocking at the door. The family later wrote a Facebook post thanking him, stating “I think we all need to be reminded that there are still good people out there. His act of kindness cannot go unrecognized.” Read more.

Jennie Dwyer, 18 months, has a deaf best friend. That best friend is Echo, the 4-year-old family dog, who also has trouble seeing. The two are inseparable buds. “They seem to always seek each other’s presence,” Jennie’s mother, Marion said. Echo’s disabilities have never slowed this pair down, whether they’re snuggling indoors, playing in the yard, or strolling down the street in matching sunglasses. This unstoppable duo is the cutest thing you’ll see all week. Read more. 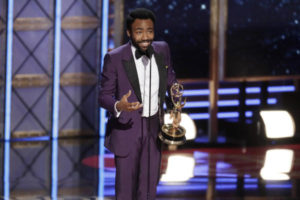 Donald Glover won two groundbreaking awards Sunday at the Emmys. Not only is Glover the first black director ever to win for directing a comedy series, but he also won best actor for that same comedy, “Atlanta.” This makes Glover the first person to win best director for a comedy in which he acted since 1977 when Alan Alda won both awards for “MASH.” “I’m glad I made history,” he said, “but that’s not what I was trying to do…I just wanted to make a really great show.” Read more.

What if mom and dad encouraged you to write on the walls? GIRL MOBB, a street artist in the San Francisco Bay Area, noticed a lack of women in the street art world and decided to do something about it. After finding  her own voice through graffiti, she applied for a grant to start a girls camp, which offers weeklong classes in street art and encourages young women to immerse themselves in pop culture and express themselves collaboratively. The result is beauty: on the walls and in the hearts of young artists. Read more.