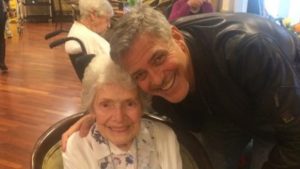 Care home resident Pat Adams got the birthday surprise of a lifetime when she received an unexpected visit from her favorite actor, George Clooney. Adams, who just turned 87, talked everyday about how much she would love to meet George Clooney, so the staff took it upon themselves to write Clooney a letter. Clooney, who lives in the English village of Sonning where the home is located, came bearing a flower and card just for Pat. “She was absolutely thrilled to meet her great icon,” a spokesperson said, “and it was such a lovely surprise to see George greet her with flowers and a card.” Read more.

Very few people will run seven marathons in their lifetime, but as a 70th birthday celebration, Chau Smith ran seven marathons in as many days and on as many continents. The challenge is called the Triple 7 Quest, and although Chau faced some difficulties traveling between extreme climates, she completed her goal. It took the small business owner from Missouri eight months to train for this incredible feat, but she’s not done yet. Chau wants to complete in the Triple 8 Quest, which has the same criteria as the Triple 7 Quest, but also includes the microcontinent Zealandia. Read more.

After the United Nations classified the Somali famine as the worst humanitarian crisis since 1945, social media star Jerome Jarre decided he had to do something to help. After some research, he learned that one of the few airlines that flew to Somalia was Turkish Airlines. Jerome started a plea on Twitter titled #TurkishAirlinesHelpSomalia, which was quickly noticed by other celebrities. Before long, celebrities such as Ben Stiller made similar pleas online and caught the attention of Turkish Airlines. The airline said they would provide a cargo flight with 60-ton capacity to fly in supplies. With only 10 days to get supplies, a GoFundMe quickly surpassed the $1 million fundraising goal. Read more.

Kindness that Goes Beyond a Sandwich

For years, Ginger Sprouse drove past the same homeless man on the way to work. Finally, she decided to stop and chat with him and learn his story. Ginger learned that his name is Victor Hubbard, and he was staying at the same spot so he could find his mom when she came back. Victor suffers from mental illnesses, and Ginger knew she had to do more than simply offer him a coat and a sandwich. She set up a GoFundMe page, which has now raised more than $18,000 and decided to take Victor into her family home full-time and give him a job at her small business. “This man doesn’t need another sandwich. What he needs is someone to help him do something with all of this,” Ginger said of her decision to go above and beyond. Read more.

Sage, a blind 12-year-old dog was missing from home for eight days while her family exhausted a number of rescue attempts, from the classic flyers to a professional dog finder, all to no avail. However, when neighbor Dan Estrada and his friend Vincent Lopez went for a casual walk in the redwood forests, the two stumbled upon Sage. Estrada, who’s also a firefighter, recognized the missing dog immediately because his own dogs were frequent playmates of Sage. Estrada and Lopez turned down the reward money and suggested they donate it instead. Read more.