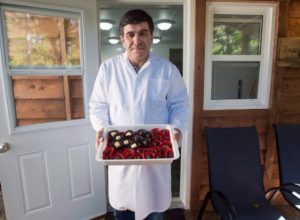 A refugee family in Nova Scotia, Canada, has not only succeeded in rebuilding their own lives, but in revitalizing their community, one sweet at a time. When war forced the Hadhads to flee their home and their chocolate business in Damascus, Syria, they made up their minds to continue the enterprise in their new life. During their first year in Canada, the Hadhads founded Peace by Chocolate, and business is booming. Peace by Chocolate is about to double their staff, and is beginning to partner with grocery stores in the community. Read more.

Nothing quite says “summer” like a good old-fashioned lemonade stand. But what happens when you add some compassion to that fun, vacation pastime? Amiah Van Hill, age 6, used her summer break to make the school year better for her less-fortunate classmates. From a roadside stand to a GoFundMe page, this Idaho second-grader is well on her way to paying off the school lunch debt of her entire district. Read more.

Everyone loves a good deal. Kimberly Gager, a mom with a knack for bargain-hunting, is using her coupon expertise to shop for the relief of Hurricane Harvey victims. Realizing that coupons she might normally skip over, like those for diapers or formula, could be useful in providing for people in need after the storm, Gager set to work. She began collecting donations and used her coupons to  purchase everything from diapers to dry goods that she then distributed to the affected families. She plans on continuing her relief efforts as long as donations keep pouring in. Read more. 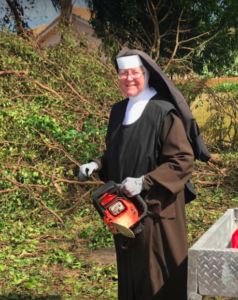 Miami  residents’ spirits were lifted by a surprising sight this week. Local high school principal, Sister Margaret Ann, was not about to sit idly by in the wake of Hurricane Irma. With roads blocked and cars spinning out in the mud, Sister Margaret Ann decided to grab what tools she could and take to the cleanup effort herself. “There was a need, I had the means–so I wanted to help out,” she remarked. The result? Chainsaw nun. Wearing her full habit, Sister Margaret Ann took a chainsaw to the trees that had fallen in the road, helping clear the streets for her community. Read more.

Looking on the Bright Side

Solar panels and renewable energy often call to mind hopes for a better environment, but what about a better society? Former LA gang-members are finding opportunities for t life after prison through Homeboy Industries’ solar panel installation program. The program has been training and employing former prison-inmates and gang members, helping them to lead fulfilling lives and create a promising future in a growing industry. Read more.