Abandoned Dog Gets Job at a Gas Station

When Sabrina Plannerer bought a Shell gas station in Mogi das Cruz, Brazil, it came with an unexpected employee: an adult black lab named Negao. Sabrina found Negao, who was abandoned by his owners, wandering nearby her new gas station and decided immediately to adopt him. Negao did not only get a new home, he also got a new job! Sabrina was not sure how he would react to the new environment but now he’s her best employee. He greets all the customers and everybody loves to see him. Negao even has his own uniform and badge to wear while he’s working. Read more.

When it comes to looking after the parents they employ, Yum! Brands takes company policies seriously. The fast food company which owns franchises like as KFC, Taco Bell, and Pizza Hut announced that it will give new mothers 18 weeks of paid leave. Fathers, partners, adoptive, and foster parents will also receive six weeks of baby bonding time. This new policy will be effective immediately and is a part of Yum Brand’s ongoing effort to highlight its people-first culture and invest in its employees. Read more.

Part of Her Student’s Life Forever

Preschool teacher Beth Battista cares deeply for all of her students, and now she has the scar to prove it. Beth and her five-year-old student Lyla Carreyn are both recovering after a successful kidney transplant that saved the little girl’s life. Lyla had been struggling with a rare autoimmune disorder for over a year and during that time, her family had difficulty finding a transplant match for her. After hearing Lyla’s story, Beth decided to see if she was a match and found out that she was a compatible donor. Read more. 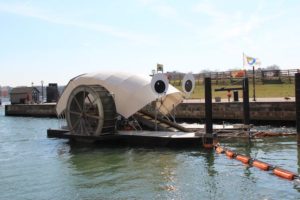 In May 2014, two water wheels, nicknamed Mr. Trash Wheel and Professor Trash Wheel, were installed in the Baltimore Harbor. Though these two wheels, which are adorned with googly eyes and huge mouths, may look silly, they do the extremely important job of keeping trash and other waste out of the Baltimore Harbor. In the almost three years since their installation, the two wheels have prevented over 1 million pounds of trash from entering the Harbor. The trash that is picked up is sorted into either garbage or recycling. These two have been so successful that a third waterwheel, Professor Water Wheel, was installed in December. Read more.

Clothing Store Encourages Suiting Up for a Cause

Utah Woolen Mills, a Salt Lake City-based clothing store, has started a campaign called “Suited for Good,” which donates one suit for every suit sold in store. The store hopes the donated suits will inspire confidence in those who might be going through a rough time. In addition to donating suites, Utah Woolen Mills will provide all the necessary accessories from the tie to the socks, a professional fitting, and interview tips. Read more.