Boston Marathoner Engaged to Firefighter Who Saved Her Life 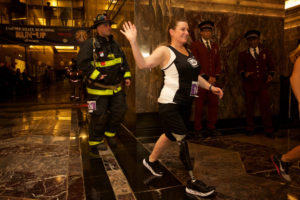 Roseann Sdoia almost died after her leg was severely injured during the 2013 Boston Marathon bombing, but thanks to firefighter Michael Materia who raced her to the hospital, she’s able to run again. In the days after the bombing, Materia visited Sdoia in the hospital, and the two formed a friendship that soon turned romantic. Materia proposed in early December, and the pair show no signs of slowing down anytime soon. They recently ran the Empire State Building Run-Up, a race to the 86th floor of the iconic building which raises money for the Challenged Athletes Foundation. Read more.

San Francisco made history this week as the nation’s first city to make city college tuition-free for its residents, regardless of their income status. The law, which goes into effect next fall, is expected to benefit at least 300,000 local students. Part-time and full-time students are eligible if they have lived in the city for a year and a day. “Making City College free is going to provide greater opportunities for more San Franciscans to enter into the middle class and more San Franciscans to stay in the middle class if they currently are,” San Francisco Supervisor Jane Kim said. Read more.

Little Boy Gives Away His Own Toys for Those Without Any 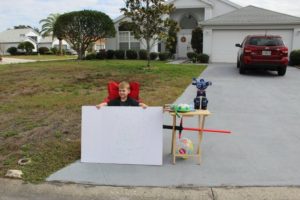 After learning that not every little kid has toys, 6-year-old Blake Work decided to do something about it. Blake’s mom Melissa said that Blake was extremely hurt for other kids and decided to set up a “lemonade stand” style operation, giving his toys away so other kids could have a chance to play. Blake also gave away some of his favorite books to a family who said they didn’t have much but wanted books for their 18-month-old son. Read more.

Rather than birdhouses and coffee tables, students at a vocational school in West Virginia are building tiny homes for flood victims. Following flooding in West Virginia last June that killed 23 people and destroyed more than 5,000 homes, residents have struggled to find housing. Students have built 15 homes with funds from the state’s board of education and private donations. They are gaining practical skills like carpentry and electrical work — and a valuable lesson in what it means to give back to your community. Read more. 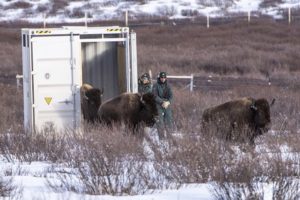 After a century away from their home, a herd of wild bison has finally returned to Banff National Park in Alberta, Canada. Due to human interference, the bison who once dominated the area had to be relocated to save the species. Now, 16 bison have returned to repopulate the park and attempt to revive the species that was nearly decimated in the 19th century. This is an extremely exciting homecoming for these animals who might have never seen their rightful home if not for the efforts of Banff National Park. Read more.