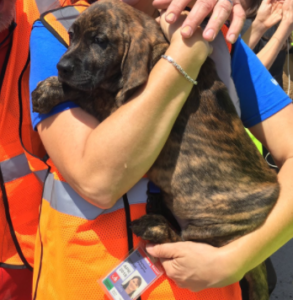 The aftermath of Hurricane Harvey left many shelter animals with nowhere to go. That is until Southwest Airlines and the California-based Helen Woodward Animal Center stepped up to the plate. The two organizations have teamed up to transport the Texas animals to San Diego, California, where they will receive medical evaluation and treatment. The cats and dogs were the guests of honor aboard their evacuation flight, with 64 pets taking up the main cabin in their carriers, with their seatbelts on and tray tables up, of course. Read more.

Backpacks for Kids in Need

Camden Elementary School’s principal Sam Garrison believes that the community makes the school. So, he likes to check on the neighborhood, saying, “If we take care of our community, in return the community will take care of the school.” This summer, while walking door-to-door to check in on his students, he was upset to find two of his school’s young people living in a home that had been ravaged by a fire. Garrison promptly reached out to the fire department to see if they had anything leftover from a backpack drive held earlier in the summer. The department then gathered the remaining supplies and personally delivered them to the affected children, who were delighted to be able to start the school year with brand new school supplies. Read more.

Have you ever lost a sentimental object dear to you? Tatiana Fernandez, an Amazon employee, can relate. She lost her engagement ring while packing children’s books in a Scotland warehouse. Hundreds of miles away in Manchester, Stephenie Healiss, opened her Amazon package of children’s books and discovered Fernandez’s engagement ring. Healiss contacted Amazon, and the company was able to find and help return the ring to Fernandez in time for her wedding day. Read more. 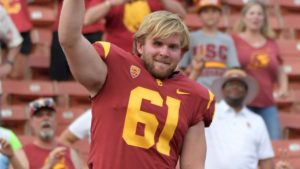 Blind USC long-snapper Jake Olson made his debut in a football game against Western Michigan last Saturday. He completed a successful snap, gaining USC the final point in a 49-31 win. Olson is a lifelong USC fan. When Olson was preparing to have vision-ending surgery at the age of 12, he spent the night before watching the USC football team practice. How did he feel after becoming a letter winner for USC? “I loved being out there. It was an awesome feeling, something that I’ll remember forever, getting to snap at USC as a football player.” Read more.

University of Texas Alum and Regent Steve Hicks has donated a generous $25 million to the UT Austin’s School of Social Work. Part of this gift will go toward reducing the debt of social work students. The donation itself is one the largest ever to a public college’s social work school, whose students Hicks refers to as “heroes.” Hicks was inspired to donate after battling alcoholism and knowing firsthand the importance of social workers. “It’s not the most glamorous of jobs. I don’t know that I could do it myself, but I have deep admiration for those who can.” Read more.