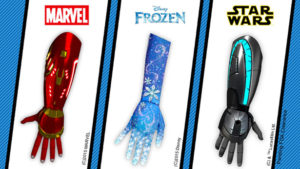 Open Bionics, a company that designs robotic prosthetic limbs, wants kids to feel confident and excited about their prosthetics. To accomplish this goal, they have teamed up with Disney to start the Techstars’ Disney Accelerator Program. They now have royalty-free access to design kids prosthetic arms with “Frozen,” “Iron Man,” or “Star Wars” themes. The designs use LED lights to make them as similar as possible to their source material. The company’s goal is to use 3D printing to produce these designs, which should keep costs affordable and make them easily accessible for all children in need. Read more.

‘Total Eclipse’ Headlines in the Skies and on the Charts

Monday’s total solar eclipse was a historic moment in more ways than one, as Bonnie Tyler’s 1983 hit “Total Eclipse of the Heart” climbed to number one on the iTunes downloads chart for the first time ever. Tyler also made headlines by performing the song for the passengers aboard the Royal Caribbean’s Total Eclipse cruise, just as the total eclipse happened. The ship, of course, was sailing in the eclipse’s path of totality for the special moment. Tyler calls the song “evergreen,” which can be proven by its popularity at a karaoke bar on any given night. Read more.

When Copper Hills High School opened a food pantry, teacher Rickee Stewart was shocked to find out more than 100 homeless students attend her school. She wanted to help in any way she could. So, instead of being the addressee for gifts for her upcoming wedding, she asked her guests to send donations to the homeless, thinking of the children at her school. She has registered for sneakers, backpacks, and winter coats, saying, “My hope is that we get to not only have this amazing wedding and start our lives together, but that we are able to put some warmth on all of those kids.” Read more. 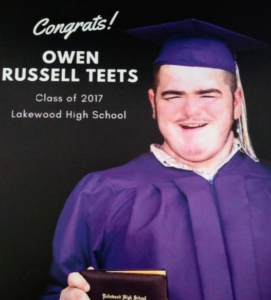 Sarah Russell knew her special needs son, Owen Russell Teets, would be overwhelmed by a party after graduating high school. However, she still wanted to celebrate the milestone, so she spread the word that Teets loves to receive mail. So far the snail mail celebration has been going strong, with Teets receiving almost 100 cards, including some from complete strangers. Russell says the cards have brought her son immense joy, stating, “So getting one more letter in our mailbox is just one more smile on his face. He looks every day for the mail.” Read more.

Chicopee, Massachusetts, resident Mavis Wanczyk called the hospital she works at Thursday morning to let them know she would not be coming to work that day, or any day. Why? Well, when you’re the winner of the largest Powerball jackpot ever won by a single person (and the second largest in U.S. history), work isn’t exactly a priority. Wanczyk’s $758.7 million jackpot will be paid in a lump sum, meaning she will get a lesser payout of $480.5 million, before taxes. Wanczyk said winning the lottery and retiring early has always been a “pipe dream,” but as it turns out, dream comes true! Read more.