Adorable Gym Meet-Cute for Couple in Their 90s 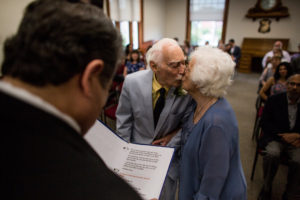 Forget Bumble or Tinder, the gym could be the hot spot for finding a future spouse. At least, that’s where 98-year-old Gertrude Mokotoff and 94-year-old Alvin Mann found each other five years ago, and they’ve been inseparable ever since. Mann says he was often teased about dating a cougar, but the two really broke stereotypes when Motokoff decided to “buck tradition” and asked Mann to marry her. The two wed on August 5. Despite their ages, you shouldn’t worry about their health: They still work out at the gym where they met twice a week. Read more.

Timothy Smith, CEO of Patriot Commercial Cleaning,  knows how hard life can be after the military. A U.S. Army veteran, Smith served in Iraq, but couldn’t find a job for six months after getting out of the military in 2007. Later, when got back on his feet and started his own business, he wanted to do what he could to help out some of the one million unemployed vets in the United States. To date, he’s hired more than 40 veterans. Smith is currently in remission from lung cancer and credits part of his healing process to the “therapy” of working with his military brothers, saying, “It just means a lot to be working with these guys and gals that I served with.” Read more.

The Better Health Bakery isn’t trying to to imply that their chocolate chip cookies, treacle tarts, and olive and herb loaves are actually good for your diet. Their name doesn’t stem from their products, but rather from the remarkable program they run for employees of their business. As a part of the Center for Better Health, the bakery employs trainees with mental illnesses as a part of their recovery. The 12-week placement program provides a safe environment to learn both work and social skills. Most customers are aware and supportive of the program, fostering an environment trainees having called “refreshing,” where “you’re not unique in sharing your mental health journey.” Read more. 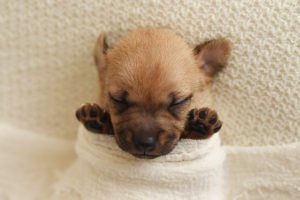 Kelly Frankenburg is a newborn and baby photographer from Richmond, Virginia. Recently, her love of animals led her to the decision to start fostering dogs. Her first family of dogs was a mama chihuahua with her litter of 2-week-old puppies, and she was struck by the similarities between the three tiny pups and her usual clientele. She decided to stage a traditional newborn photoshoot starring the pups, sleepy and swathed in blankets. Her goal? “If I can use my talents to showcase them in a way that catches the eye of a potential adopter, then I’ve done my job,” she explains. “Shelter dogs are just as good as breeder dogs, and I want to raise awareness for all these wonderful shelter animals who need good homes.” Read more.

The Yeung family was looking for a fun home project that sisters Rebecca, 12, and Kimberly 10, could work on together. What they ended up with was a project that would take them to the White House science fair to meet President Obama and have them eventually working with NASA. During the upcoming total solar eclipse, the two girls will be launching a ballooning craft they engineered together. The launch has them working with the Montana Space Grant Consortium, sponsored by NASA. Rebecca had some advice for young girls like her who are interested in STEM: “Don’t give up because even if some people tell you, ‘You can’t do this, or it’s going to be too hard,’ just keep on going and persevere. Even if something goes wrong, which will happen, just keep on trying.” Read more.