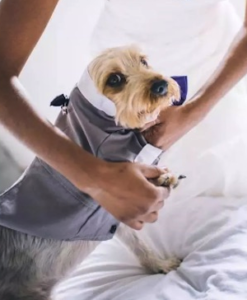 When Sean McCrory and Sheree Atcheson of Belfast, Northern Ireland got married, they knew they needed to involve their pup Alfie in the ceremony. Fresh from the groomer, Alfie’s suit was buttoned on, and his tie straightened as he prepared to carry out his duties as ring bearer. With rings tied to his back, he nearly stole the show as he ran, tongue hanging with joy, to his newly married owners. The wedding pictures could not have been cuter, as the married couple and their fluffy friend were all smiles. Read more.

Perhaps 92-year-old Stasia Kowalski had knots in her stomach before her big swim meet because she knew she was about to do something special. For the past 52 years, Kowalski has dedicated herself to swimming nearly 45 laps per week. At her very first meet in Louisville, Kentucky, she ditched her cane, dove into the pool, and started the competition. After breaking two records at the meet, Kowalski casually mentioned that it was no sweat. She isn’t one to take a break from training, though. She has her eyes on making a splash at next year’s meet, too. Read more.

It might not look like a traditional yoga class, but for Seattle-area prisoners, the opportunity to find a little peace and mindfulness is a welcomed one. More than 100 volunteers working with the nonprofit organization Yoga Behind Bars teach yoga and mindfulness in prisons around the area. Rosa Vissers, Yoga Behind Bars’ executive director, says that people in prison should know that they mean something, that they are worthy. Vissers and other volunteers help to create a safe environment where prisoners can escape the confines of their cells and discover new skills and talents, even leading yoga classes themselves. See more. 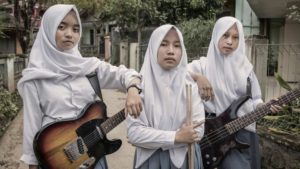 Indonesian teens can really rock! Voice of Baceprot, an all-girl teenage metal band, recently performed on the most popular variety show in Indonesia. Despite backlash from people who believe they should stop playing because they claim the music is forbidden in Islam, the band has received overwhelming support from their community and is finding success worldwide. The band hopes to put out an album by the end of the year, and inspire younger generations to follow their music dreams. Read more.

NASA Responds to “Guardians of the Galaxy” Applicant

At 9 years old, Jack Davis just submitted his first ever cover letter. The position? To be a “Guardian of the Galaxy” at NASA. Jack has some pretty solid experience, including seeing a plethora of sci-fi films, and being young enough “to learn to think like an alien.” And, of course, the fact his sister claims he’s an alien can’t hurt. NASA’s director of the planetary science division responded personally to Jack in a letter, telling him, “We are always looking for bright future scientists and engineers to help us, so I hope you will study hard and do well in school. We hope to see you here at NASA one of these days!” Read more.