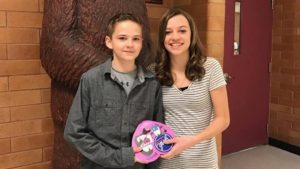 Teen Gives Valentines to All 537 Girls at School

Upon learning the effects that negative self-image can have on teens, high schooler Tryston Brown was inspired to make this Valentine’s Day a memorable one for all 537 girls at his school. After telling his family about his intent to give everyone a valentine, they reached out to Hershey. The famous chocolate company, which has a distribution center in Tryston’s hometown, donated the Valentine’s Day sweets to his cause. Read more.

Mike Ilitch, the founder of the pizza chain “Little Ceasars” and the owner of the Detroit Tigers, passed away last Friday, but his act of quiet generosity will be remembered for a great time to come. Shortly after the act of defiance that sparked the Montgomery bus boycott, Parks moved to Detroit, where she continued to be an important force in the Civil Rights movement. After Ilitch read about Parks getting robbed and assaulted in her home at the age of 81 and having to move, Ilitch offered to pay for her housing indefinitely. Read more.

Never too Young to Run

Georgia teen Mary-Pat Hector always knew that she wanted to be a politician and at just 19 years old, she’s close to making those dreams come true. Hector decided to run for city council in the city of Stonecrest and in the process became the youngest eligible candidate ever in Georgia. She hopes to use the position to give young people a voice in her community and be an inspiration to others to serve the common good. “Young people are starting to really understand and see that they can truly be a part of the political system and they can truly run for office,” Hector says. Read more.

Fascinated by her love of tech, 7-year-old English Chloe Bridgewater took the initiative to write a letter to Google in the hopes of one day landing a job. Much to Chloe’s surprise, Google’s CEO Sundar Pichai sent back an encouraging response that told Chloe to keep pursuing her dreams, and that he looked forward to receiving her application once she was done with school. Read more.

When Thomas Mitchell, a substitute bus driver, saw Lydia Despain struggle to go up and down the wheelchair ramp at her house, he knew he had to do something. Thomas is a mechanic who sometimes subs as a bus driver and Lydia, who suffers from a seizure disorder that has caused her to be wheelchair bound, is often on his bus when he drives. Thomas reached out to Lydia’s mother and offered to build a new ramp, which was joyfully accepted by the family. Read more.