Katie Smith and Ed Sellers fell in love in as young teens, but could not date at the time because of strict religious rules. They parted ways and went on to marry other people, but their love for each other never died. When both Sellers and Smith were widowed, they began seeing each other again. Eventually, Smith agreed to marry Sellers; however, they feared the ceremony would be too long to stay in their feet, due to their health. So, the two decided to tie the knot in rocking chairs. They rocked away while giving vows, and after 60 years, finally got their happily ever after. Read more.

Aaron Tucker was trying to get back on his feet after being in prison. On the way to a very important and highly anticipated job interview, the 32-year-old father saw a car overturned and smoking. He jumped off the bus he was on and pulled the driver out of the car. He tended to his wounds and looked after him until the ambulance arrived. EMTs took the driver to the hospital where they saved his life. Tucker missed his job interview, but his good deed has brought him three other job offers in addition to a GoFundMe page started by the community to offer Tucker support. Read more.

Girl Scout Troop 6000, a group comprised of young homeless girls in New York City, has impacted countless lives, and  the city is now looking to expand their impact twenty-fold. A $1 million investment from the Mayor’s Fund to Advance NYC will add 15 shelters that will be able to serve 500 more women. Troop 6000 is preparing homeless girls from kindergarten to high school for careers and roles of leadership in their communities. With new funds, the troop can expand the mission that Giselle Burgess started in a 10-story inn that served the homeless of Long Island City, Queens. Read more. 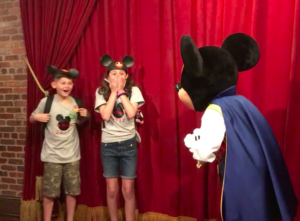 It sounds like a story that could only be written by Walt Disney himself. Siblings Janielle, 12, and Elijah, 10, were were offered a special meet and greet with Mickey Mouse during their trip to Disney World with their foster parents. As the two children stood starstruck next to the mouse, Mickey presented them with a sign showing the court date for their official adoption day. Janielle couldn’t help but cover her face in shock as joyful tears ran down her cheeks. Her whole new family came in for a group hug. Disney World truly was the happiest place on earth for this family. Read more.

Bus driver Trudy Serres of Waukesha, Wisconsin, goes above and beyond to ensure the happiness of the kids she drives to school every day. The 43-year-old had been teaching one of her students to crochet, when the student’s younger brother asked her to make a crocheted taco. Once Serres made the taco, her little student showed all of his friends the awesome work. The other children wanted their own toys and put in their own requests, to which Serres happily obliged. Trudy Serres may not have a magical flying school bus, but she does have an amazing gift, which she shares with all of her children to make their days a little brighter and their bus rides a little better. Read more.