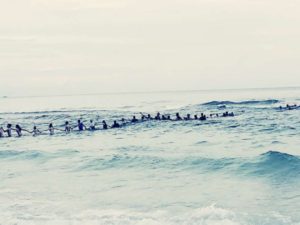 Hours after lifeguards had gone home, 40 men and women took it upon themselves to make a daring and clever plan to save nine drowning swimmers. Originally, two young boys cried out for help after they were tugged away from the shoreline by unrelenting rip currents. A group of adults tried to rescue them, but found that the currents pulled them 70 yards out into the ocean as well. Quick to think on his feet, Derek Simmons rallied 40 beach goers to lock arms and form a human chain that was able to save the distressed swimmers. “It was pretty amazing stuff for it to be different races, different genders, different ages; everybody got together to help,” Simmons said. “Everybody that was involved is a hero in my book.” Read more.

Carter Crockett is bringing the simple joys of childhood — crayons and coloring books — to children fighting cancer. About a year ago, the15-year-old autistic humanitarian was casually having lunch at a local Chili’s restaurant when he noticed collection signs for St. Jude’s Children Hospital. Wanting to do more than just donate a few dollars, he sprung into action, collecting coloring books and crayons for the local hospital. Crockett says he wants to “put his autism aside so he can help the other children.” He’s already accumulated 15,000 crayons and 1,500 coloring books. With his good works, his wish has and will continue to come true. He’s helped more than he knows and has inspired others to help children fighting cancer, one act of kindness at a time. Read more.

This week, Tinder has taken its love matching game to the next level. Tinder users Josh and Michelle have been communicating for three years; however, in a very untimely fashion. Both take days, or even months, to reply to each other, often responding with a simple “sorry, I was in the shower” after weeks of silence. As a joke, Josh posted their message threads on Twitter, and received an overwhelming response. Their story became so popular that Tinder then offered the two a first date wherever they please. In a world of ambition, it looks like procrastination finally paid off. The two will be taking a trip to Hawaii to celebrate their very first date. Read more. 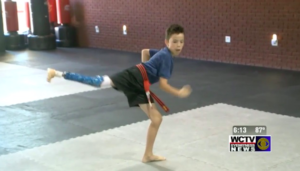 Kicking with his 12th prosthetic leg, Toby King has finally reached his dream of wearing a Taekwondo black belt. When Toby had his lower leg amputated after his 1st birthday, his family never imagined that he would achieve such great physical feats only eight years later. Setbacks have been no match for this Taekwondo master, as he shows no signs of letting up on his passion. Read more.

There’s no telling how many inspiring stories unfold from coast to coast on a daily basis, but Kerry Gross is biking 6,000 miles to find just a handful. Noticing that the back of every Clif Bar told the story of an adventurous man’s feats of strength, Gross wondered how many women’s unknown inspirational stories were waiting to be told. Departing from San Francisco, she pointed her bike toward Maine with the hopes of sharing inspiration and reaching the east coast in August. Read more.