A Coffee Shop with a Mission 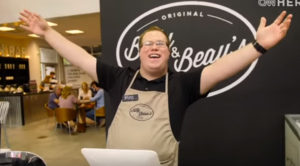 Bitty & Beau’s Coffee, a thriving new hot spot in Wilmington, North Carolina, is proving just how capable adults with mental disabilities truly are. The inspiration for the shop came when Amy Wright discovered that nearly 70 percent of people with mental disabilities are unemployed. As the mother of two children with down syndrome, this statistic was particularly troubling for Wright. So, she decided to open a coffee shop that employs adults with intellectual and developmental disabilities. Bitty & Beau’s Coffee is keeping pace with competitors, while at the same time building employees’ confidence in their work and social capabilities. Read more.

This cute couple has quite literally been through it all together, from meeting in preschool to becoming the happiest newlyweds. Laura Scheel and Matt Grodsky had been best friends since they met in preschool. Their childhoods were spent playing tag on the playground and reciting their favorite “Lion King” lines. After losing touch for a few years, the two reconnected in high school and formed a close relationship that endured the long distance between them when the couple went to different colleges. Twenty years after their first meeting, Grodsky proposed in the place where their story began: their preschool classroom. Read more.

Every little kid has tried to convince their parents to buy them something — candy, toys, pets, you name it! But 11-year-old Romesa from Texas chose a unique way to do so — writing a six-page essay. Romesa loves cats and after some unsuccessful attempts at begging for one, she decided to convince her parents with the written word. Romesa’s essay, “Why I Would Love a Cat, Benefits of Cats, and Fixing Problems” is full of pictures, statistics, and facts she researched herself. When her sister posted the essay on social media, the internet started rooting for Romesa. People even started using the hashtag #letRomesahaveacat. We hope you get your furry friend, Romesa! Read more. 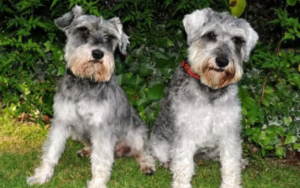 It wasn’t the 120 volunteers or even the two drones, but the alluring smell of an early 4th of July barbeque that brought two lost dogs back home. While on a walk, miniature schnauzers Charlie and Theo were lost in a dense fog. Owners Liz and Graham Thompson frantically searched for hours, calling upon the help of friends and neighbors to search for their furry family members. As a last resort, the Thompson family retraced their steps and set up a barbeque where the dogs were last seen. Sure enough, it wasn’t long until Charlie and Theo came trotting over to join the party and were reunited with their family. Read more.

Hayley Williams was stunned when she saw a face she had only seen on the big screen handing her a college scholarship. Before taking on roles such as Kylo Ren in “Star Wars,” actor Adam Driver was a Marine, and now he’s helping to give back to veteran families in need. Hayley’s veteran father, John, works long hours as a bus driver, but despite his hard work, Hayley’s tuition seemed nearly impossible to pay before this miracle. Now, with her newly awarded grant from the Folds of Honor Foundation, Hayley will be able to achieve her dream of going to nursing school. Read more.