Dad Wears Tie His Son Made in First Grade to Graduation 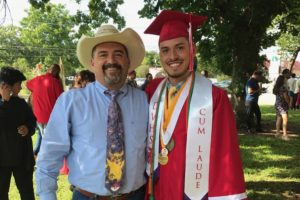 Dylan Olivo had just graduated high school and was surprised to discover his father’s outfit choice for the ceremony. Olivo’s dad wore a Pikachu-themed tie that Olivo made for his dad when he was in first grade, 11 years prior. He tweeted a photo that then went viral. Olivo told “Teen Vogue,” “I still remember making the tie for him, and I think he does too. He had it planned this whole time to wear it.”We’ve located the dad of the year! Read more.

Confetti flew and crowds cheered as 94-year-old Harriette Thompson approached the finish line of the Rock N’ Roll San Diego Half Marathon. Giving onlookers some major fitspiration, Thompson broke records last Sunday by becoming the oldest person to complete a half marathon. Undeterred by age and numerous medical treatments, the two-time cancer survivor began running regularly at age 76. Since then, she has run the Rock N’ Roll marathon 16 times, all while raising more than $100,000 for the Leukemia and Lymphoma Society. Read more.

After a Chicago Cubs victory, catching a cab outside of Wrigley Field seems impossible. One fan, Casey Spelmen, noticed that a blind man was having a particularly hard time getting a taxi’s attention amidst the commotion and fanfare. After asking the man, later identified as Yusef Dale, if he would like assistance, the two managed to catch an approaching cab’s attention. This random act of kindness was caught on camera by onlooker Ryan Hamilton, who photographed and praised the good samaritan’s act on Instagram. Read more. 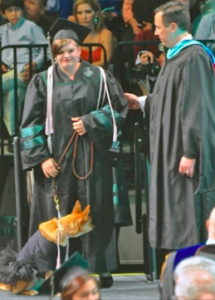 Morgan Rath’s depression and anxiety left her thinking she would never be able to complete high school, as she continually missed classes due to panic attacks. However, things took a turn for the better when she found a stray puppy she named Paisley. After Paisley worked with a trainer to become a service dog, Rath’s school agreed to let Rath bring Paisley to her classes. When Rath received her high school diploma this week, Paisley was right there with her, giving her the courage to walk across the stage. Mark Tranchenbroit, school principal, praised the dog, saying, “Without a doubt, 100 percent, Paisley, I think was the last piece of the puzzle to help Morgan go through.” Read more

Dancing in the Street

When faced with hate, Ariana Grande responded by bringing people together in love and solidarity. After the recent attack at her concert in Manchester, Grande organized a benefit concert on Sunday to honor the victims. The event raised around $2.6 million for the We Love Manchester Emergency Fund. Spotted on the scene, a dancing policeman lightened the solemn mood with his spirited moves. People smiled and joined in, reminding us that there is still happiness in the world, and we should allow the free-spiritedness within us shine through with that happiness. Read more.