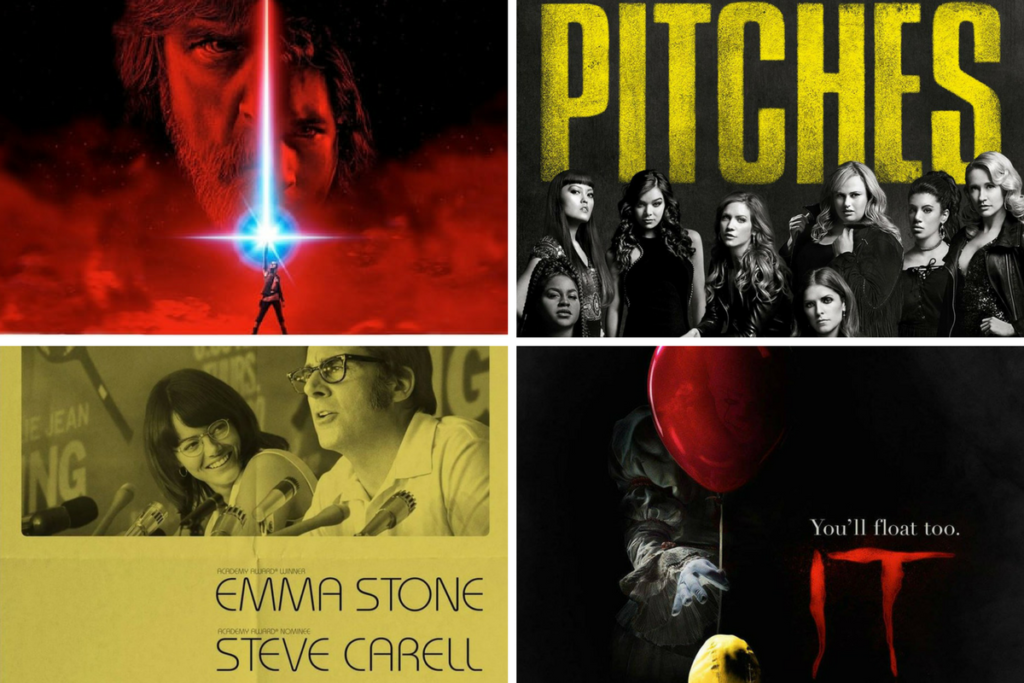 There’s just something about fall—the cool, crisp air, colorfully changing leaves, and my favorite—fall movie season. I’m excited to see some of fall’s anticipated hits for many reasons. Some of them will bring my loved ones together. Others are new takes on old formulas. And fall means the start of Oscar buzz, so there will be some great movie viewing to be had. No matter the reason, grab some popcorn and head to the theaters to enjoy these fun flicks.

“Home Again,” starring Reese Witherspoon, is a refreshing take on a romantic comedy. Witherspoon plays a single mom with kids who ends up letting three aspiring male filmmakers move in with her and hilarity (and a little romance) ensues. As a writer, one of my dreams is to write a romantic comedy for the big screen one day. I’m inspired by this movie because it celebrates independent women and is written by Hallie Meyers-Shyer, the daughter of Nancy Meyers, who’s written quite a few of my favorite rom-coms (“Father of the Bride,” “The Holiday,” “The Parent Trap”).

“It,” based on horror novelist Stephen King’s book of the same name, comes to theaters to spook moviegoers with creepy clowns. The movie plays on its characters’ fears and phobias, making it extra chilling. Seeing a scary movie with a group of my friends brings us together for a shared spooky experience, which I think makes them incredibly fun—even if I sleep with the lights on that night!

Emma Stone and Steve Carell are the stars of this film based on the rivalry between tennis stars Billie Jean King and Bobby Riggs. I’ve always been drawn to Stone and Carell, particularly Carell after reading about his real-life dedication to family and faith. I also think this film lifts up women’s ongoing struggles to achieve success in a sexist culture. I already feel empowered by this movie, and I’m excited to see it when it comes out.

The sequel to “Bad Moms” takes Mila Kunis, Kristen Bell, and Kathryn Hahn’s characters through the holiday season. Their moms come to town to both wreak havoc and teach them a thing or two, like when Christine Baranski, who plays Mila Kunis’ mother says ever so dryly, “A mom’s duty isn’t to enjoy but to give joy,” when Kunis complains about the stress of the holidays. I loved the first movie and imagined myself like one of these moms someday, bringing doughnuts to the school bake sale rather than organic, gluten-free pastries. With blogs, videos, TV shows, and more telling us we have to always look, dress, and act perfect, it’s refreshing to see some normalcy. “A Bad Mom’s Christmas” reminds us it’s fun to be “bad” sometimes and go against what society tells us is acceptable.

“Star Wars” movies have always been associated with family for me. Growing up, my dad showed my siblings and me all of the “Star Wars” movies he loved as a kid, and then we watched the newer ones that came out when we were little, like “The Phantom Menace” with Natalie Portman. When “The Force Awakens” debuted in 2015 around Christmas, my dad took us to see it as a family reunion. Much about the “The Last Jedi” has remained mum, but we do know Carrie Fisher, who died last December, will appear in the film, which was her last. There are strong family ties woven throughout the “Star Wars” franchise and I expect that they will come to the forefront in “The Last Jedi.” I look forward to seeing how this penultimate chapter in the Skywalker saga unfolds.

The Barden Bellas are back in the third installment of the a cappella franchise. This time, the Bellas have graduated from college and are missing each other. They end up singing together at a USO show in Europe after one of them suggests trying to get into the yearly show for troops overseas. I have always been drawn to the “Pitch Perfect” movies because they are such a wonderful personification of friendship. They inspire me to continue cultivating, growing, and strengthening my relationships with my friends in my own life.

“The Greatest Showman” (in theaters Dec. 25)

“The Greatest Showman” celebrates the life of P.T. Barnum and the beginnings of the circus in America. Starring Hugh Jackman and Michelle Williams, this original movie musical celebrates nostalgia. I love historical films, and this one looks like it certainly won’t disappoint with its sweeping cinematography, wonderful cast, and gorgeous costumes. Although circuses are no longer a major part of American show business after Ringling Bros. shut down, I think they are an important part of American history. I’m excited to see this with my siblings and reminisce about the times we attended the circus growing up.