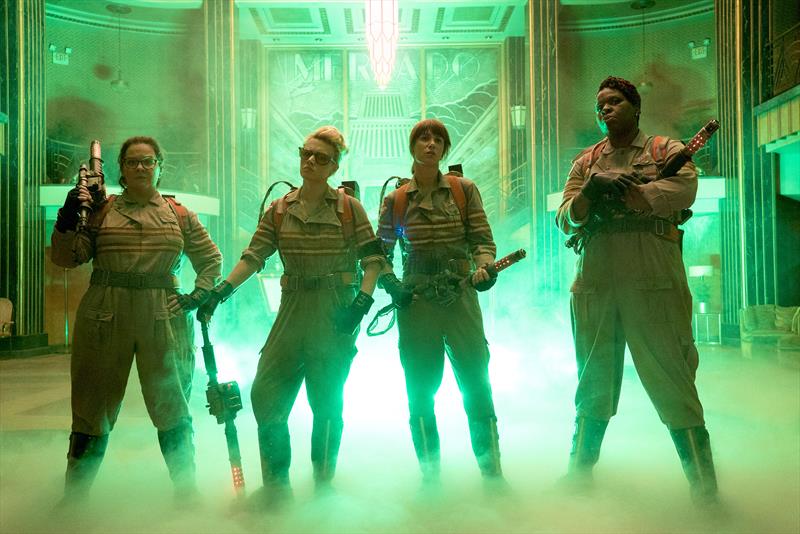 Who ya gonna call? As of July 15, when you need a ghost busted, that call will be answered by Kristen Wiig, Melissa McCarthy, Kate McKinnon and Leslie Jones. This lady-led reboot is one of the most hotly anticipated blockbusters of the summer. Directed by Paul Feig, who’s best known for directing Bridesmaids (also starring Wiig and McCarthy), the new “Ghostbusters” recently scored a rave review from original cast member Dan Aykroyd. No word yet as to whether or not the Stay Puft Marshmallow Man has seen the new film.

Speaking of major movies of yesteryear, remember Independence Day? Well, the aliens are back in “Independence Day: Resurgence,” and this time they have even more massive spaceships/terrifying war machines. Although Will Smith is not returning for the sequel, Jeff Goldblum, reprising his role as tech expert David Levinson, is back and ready to take on another round of alien invaders. With a release date of July 3, “Independence Day: Resurgence” is expected to be the biggest box office take of the summer.

Everybody loves bad guys. But one villain is a cut above the rest: The Joker. Whether it’s Cesar Romero or Heath Ledger playing the part, The Joker has never failed to rivet movie audiences. This August, we’ll get to see Jared Leto’s take on the role in “Suicide Squad” — the newest installment in the D.C. Film Universe. And that’s not all: “Suicide Squad” features SEVEN major comic book villains, including Harley Quinn played by Margot Robbie. With D.C. and Marvel releasing 22 movies in the next six years, it looks like we’re in the Golden Age of superhero movies.

Dory may not be able to remember what happened five minutes ago, but those of us who were kids when “Finding Nemo” came out in 2003 have never forgotten her. Scheduled for release on June 17, “Finding Dory” is hyped as the most anticipated Pixar sequel since “Toy Story 3” in 2010. According to star Ellen Degeneres, “Finding Dory” has all of the elements we loved in the first film: “It’s got a lot of heart, it’s really funny, and … it’s got a lot more Dory!”

I mean, come on. A movie about what pets do when their owners aren’t around? If the trailer is any indication, “The Secret Life of Pets” is going to join the ranks of “The Aristocats,” “101 Dalmations” and “The Lady and the Tramp” in the popular genre of adorable-animated-animal movies. And with a voice cast that includes Louis C.K., Kevin Hart and Ellie Kemper, we should basically all buy our tickets right now.

6. “The Light Between Oceans”

And then there’s the oft-overlooked genre in summer movies: the tearjerker. “The Light Between Oceans,” with a September 2nd release date, easily fits this category. Here’s the premise: “A lighthouse keeper (Michael Fassbender) and his wife (Alicia Vikander) find a baby girl in an abandoned rowboat and raise her as their own. Several years later, their family may be torn apart when Tom and Isabel meet a woman (Rachel Weisz) who might be the girl’s biological mother.” I’m not crying — you’re crying.

What movies are you looking forward to seeing this summer? Let us know on social media!